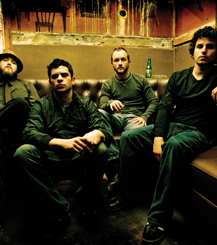 Gavin Hayes, lead singer and slide guitarist of Bay Area buzz-band dredg, is far from talkative when it comes to the band’s newest release, Catch Without Arms, simply because he knows the music speaks for the band.

The foursome – rounded out by guitarist Mark Engles, bassist Drew Roulette and drummer Dino Campanella – have spent years working together creating epic, atmospheric tunes that can best be gathered into the ‘music that thinks outside the box’ genre.

The earliest incarnation of the band started in middle school with Campanella and Engles experimenting with music together. Hayes and Roulette joined in high school to form dredg, a band whose name leans more toward hardcore than what they actually sound like.

"We wrote down some names and were like, ‘Oh, that’s cool.’ It was like 11 years ago so there’s no meaning behind it," Hayes says with a smile. "It’s a shitty name, but we’ve kept it for so long that now we can’t change it."

They started writing material while playing shows at NorCal rock hotspots like the Gaslighter, the Usual and the now defunct Cactus Club. In 1999, dredg put out its first record, Leitmotif, and got signed to Interscope Records in 2000.

Over a string of continuous tours, the band took its unique sound and fine-tuned it for 2002’s underground opus El Cielo. With their sophomore effort, people took notice of their unique sound and Hayes’s powerful voice with tracks like "Same Ol’ Road" and "The Canyon Behind Her."

For the next two years, dredg found itself on the road again with bands like Chevelle, Phantom Planet and Deftones until late 2004 when they became heavily involved with writing their third record, Catch Without Arms.

"There’s no one way we write. Sometimes it’s about one part that came from a guitar, a line from a piano or a vocal melody," Hayes explains of dredg’s creative process. "When we write, it’s a collaboration."

Hayes also says the band wanted to make an album about contrast and argumentative traits. It is for this reason that Catch Without Arms was broken into two perspectives which often create a point-counterpoint theme within the album’s tracks.

As the band tinkered with new sounds on the album, fans were given a sneak peek in the form of an online leak, months before the disc’s scheduled June release.

"It’s cool that people care, but I think demos bother me more than a record leaking because demos aren’t finished," Hayes says. "At least the record is a complete representation of what the band intended."

With the album now in stores, dredg finds itself on the road again. But this time it seems that some of the underground charm that drew so many people toward them is now being used against them as seen in mixed reactions from fan; some love and some loathe the album that has been looked upon as "popier" than older material.

"[Opinions] are always going to be split … It doesn’t bother me and it’s cool that people are at least out there talking about it enough to talk shit about it," Hayes says. "[People] can love El Cielo and think [Catch] is a big sellout record, but I’m a lot more proud of this record. It has nothing to do with being ‘radio,’ it’s about progressing as a band."

Regardless of the sound, which is arguably as original as previous works, dredg still seems to be drawing in crowds of faithful listeners who understand that bands will change over the span of a career.

"As musicians, we get bored to death trying to recreate what we did on our last record. It’s like, when we put out El Cielo, everybody in the crowd was saying, ‘Play Leitmotif!’ and now we play these songs and it’s like, ‘Play El Cielo!’" Hayes says sarcastically. "I guess we’ll just have to rush out a new record so people will appreciate this one."