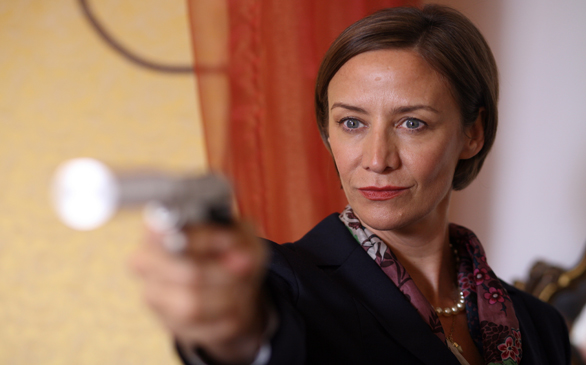 Cat Run is the latest theatrical release from actor-turned-director John Stockwell, and it feels vaguely familiar. It may find an audience upon release, but in the end, Cat Run is just another post-Pulp Fiction crime film, where all the killers have funny quirks and goofy conversations, all the while dishing out sporadic and sadistic violence. Of course, what felt so fresh in 1994 now feels slightly typical.

The story, more or less, is about two young Americans abroad who decide to play detective in order to help out a beautiful and desperate escort that is the only living witness to a murder, and its subsequent cover-up. Hijinks ensue, as does violent mayhem, laced with morbid humor, not all of it particularly funny, but I chuckled a time or two. What salvages most of the film is that it is so self-aware regarding its absurdities that it becomes endearing to watch it try to one-up itself.

The film does feature some lovely work by a select choice of character actors. Janet McTeer is probably the standout of this particular ensemble, portraying an ice-cold contract killer. Karel Roden is a welcome sight in any movie, but especially any movie where he gets to be the bad guy, because he’s just so damn good at it. He’s someone whom you keep expecting to be cast as a James Bond villain. Audiences should be so lucky. Then there’s a semi-serious turn for Christopher McDonald, known widely for his comedic work, but here he plays a United States senator that just happens to be a murderous pervert. Unfortunately, it continues to baffle me as to why Paz Vega keeps getting roles that completely squander her acting abilities, aside from her innate ability to be beautiful, which she simply can’t help.

John Stockwell certainly goes for something different with this outing. Cat Run is a pretty far cry from Blue Crush. The action is staged competently, none of that “shaky cam” business to be found here, and some of it is even, dare I say, inspired. It’s too bad that I couldn’t shake my Snatch-like déjà vu.