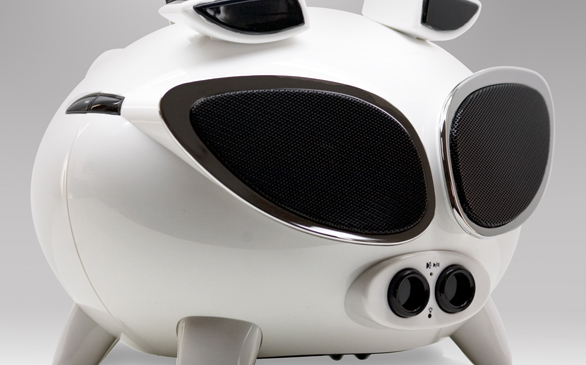 Ditch the earbuds in favor of these great new docking stations:

The Cool iPig (speakal.com) is the latest in Speakal’s line of novelty docking stations, which includes the iBoo (a ghost) and the iPom (potted flowers). Aside from being adorable, with a 23-watt output and a 15-watt subwoofer, these little docks pack a surprising punch. They’re a perfect way to listen to music while adding some color to your room and avoiding the need for bulky stereo equipment.

The Cool iPig takes the previous stations to a new level of functionality. The biggest new feature is the motion sensor controls. Wave your hand over the sensors on top of the iPig to turn the volume up and down or go to the previous or next track. Like other Speakal units, this one also comes with a remote control with full command of your portable device. You can even adjust the EQ with it. This model also features a rechargeable/removable lithium battery with a six-hour lifetime.

The iPig is made for an iPod or iPhone and plugs right into the top and charges while they play. But it also features a 3.5 mm input so it can connect to any MP3 player or other sound source with a line out. This is also handy for connecting to a wireless Internet router to stream your computer’s iTunes library via AirTunes.

The SuperTooth Disco (supertooth.net) is a totally wireless speaker solution that utilizes Bluetooth technology to stream music from any A2DP device, be it a smartphone, MP3 player, computer or tablet. Add to that the Disco’s compact, sleek design and you have a very attractive package. Tuck it into a bookshelf or set it on your desk and stream from whatever device you need to as you move throughout the house. The Bluetooth technology makes the Disco a particularly versatile speaker, whether you’re using it to boost your laptop’s audio for a quick video on YouTube or listening to an entire album on your iPod. People with a finicky Internet connection will also find added reliability in Bluetooth rather than Wi-Fi streaming.

You can also take the Disco with you anywhere you go. Its sleek design means you can easily slip it into a bag. It features a rechargeable lithium battery with a life of three to four hours at full volume and approximately 10 hours at lower levels. But with 28 watts of sounds, including a 12-watt subwoofer, it doesn’t sacrifice sound for size.

Because it has a streaming range of 10 meters, you can keep your iPod on you as you move around and use it to control what you want to hear. But the Disco also has a convenient control dial mounted on its front, with a one-touch bass boost and battery indicator. Of course, wirelessly streaming your tunes is going to drain the battery on your iPod faster. A solution would be to keep your iPod plugged in while you stream, which sacrifices having controls at hand, but you can’t have everything.

The problem with most laptop stands is that they’re not very portable, which is after all the purpose of a laptop. The AViiQ Portable Laptop Stand (aviiq.com) revolutionizes its field. Like other stands, it elevates your laptop to a more ergonomic angle while letting air circulate beneath to keep it cool. But where other stands end, the AViiQ is just getting started. It collapses and folds down to an incredibly thin 1/4 inch plate, which you can easily slide into a laptop case or even your pocket if need be. It is made of a lightweight aluminum, coming in at only 2.7 ounces (lighter than a lot of DVDs), so you won’t even notice the added weight.

It comes in four sleek monochromatic shades from white to black to match your laptop. It also includes a microfiber shammy case to protect from scratches, and which also doubles as a screen cleaner for your computer. It includes replacement silicone grips, so you won’t need to buy another stand any time soon. Plus, it comes with a 30-day money back guarantee for a no-risk trial.