Homeboy Industries: A Place of Healing 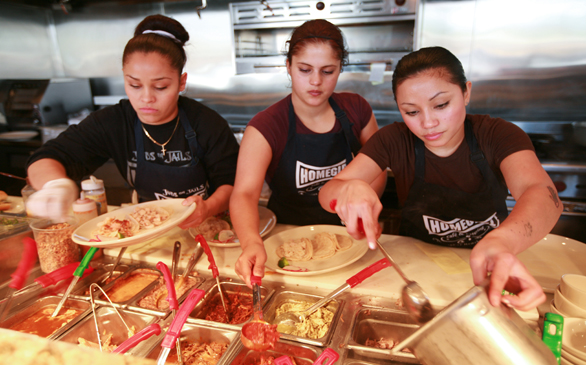 Working the line at Homegirl Café

California is no stranger to the disadvantaged or underprivileged persons trapped in neighborhoods afflicted by poverty and violence. Some become at-risk youth and often join gangs, which often has a negative influence on their lives. The homeboys and homegirls who go to Homeboy Industries understand these challenges. Living by their mission statement, “Nothing stops a bullet like a job,” Homeboy Industries seeks to find ways to help the men and women who come to it to find the right path.

Homeboy Industries began with a job program called “Jobs For a Future” (JFF), which Father Gregory Boyle (known as Father G.), the founder and executive director of Homeboy Industries, began at Dolores Mission parish in 1988. In 1992, Father Greg opened a small bakery in a run-down warehouse across the street from Dolores Mission, launching the Homeboy Bakery. A mission was set to create an environment that provided training, work experience and the opportunity for rival gang members to work side by side to counter the civil unrest in Los Angeles. Homeboy was a place where difficult-to-place young people could be hired into a safe environment. Thus, it allowed them to gain job skills, to better prepare for permanent employment and become stronger individuals.

Homeboy became an independent nonprofit organization in August 2001. It has since grown, moving from its original location to the current headquarters on Bruno Street in downtown Los Angeles, near Chinatown. In its nearly 20 years, Homeboy Industries has had an impact on the Los Angeles gang situation, with young people from over half of the region’s 1,100 known gangs seeking a way out through Homeboy.

Art, who recently began working at Homeboy, has seen its impact as it has grown.

“I’ve seen this place and heard about its progress since it was on 1st and Boyle, in just a regular office, and now it’s ... I can’t believe it.”

Since its original small office, the program has attracted people who want to change, like Art.

“I’ve known [about] Homeboy for years,” says Art. “Since I was a teen, but Father Boyle finally saw some changes in me. That I’m ready to do a turnaround. Before I was out there gang-banging and stuff like that. This place helps you change your life. It’s a place of healing. [It] helps you stay away from gangs, drugs and stuff.”

Homeboy has a policy of unconditional love. It wants to see that people are ready for change, and it has open arms for those who are. Even for those who are not ready, it still tries to help. The Homeboy name is taken from the street term “homie” and related monikers that people use when referring to friends and often fellow gang members. Homeboy Industries seeks to spin the slang in a positive way. As soon as you walk through the doors of Homeboy Industries, everyone there is your homeboy or homegirl.

This creates an environment that is the opposite of gangs. In gangs, they receive conditions, based on warnings, where one false move can leave you on the outside. It is hard to recover from this state. Homeboy Industries seeks to be a community of unconditional love.

At Homeboy, people can come in and talk to people who want to help them with their problems, instead of putting them down or mocking them.

“I don’t feel any negative vibes in this place. I’m used to negative. That’s all I’ve had in my life,” Art says.

He credits the positive energy of Homeboy with his motivation and opportunity to change.

“That’s why this is my first time changing. I’m not perfect or anything. This is a start. You have to start to change,” he offers.

The goal of Homeboy today is not only to aid people in leaving gang life, but also to do so by providing them with a new outlet that gives them hope and self-worth.

This year, Homeboy Industries celebrates its 20th anniversary. The program has stood strong even after the bakery burned down in 1999 and the economic struggles last spring. It continues to focus on the original goal of assisting at-risk youth to become contributing members of their communities. Admired for the work it does, the community-based program receives support from many organizations and individuals who volunteer. Today Homeboy Industries’ nonprofit development enterprises include Homeboy Bakery, Homeboy Silkscreen, Homeboy/Homegirl Merchandise and Homegirl Café.

Homeboy Bakery, the founding business, has continued to be a symbol of hope and possibility for Homeboy Industries. Available at farmers’ markets across Southern California, it provides several varieties of handmade baked goods, from hearty loafs of breads, croissants and bagels to delicious sweets like cakes and cookies. The fresh goods are available at the Homeboy headquarters, and the team is also available for contract work and special orders.

Homegirl Café, located at the Homeboy headquarters, features baked goods daily. The café serves as a place to pick up a quick breakfast or lunch or have a nice sit-down meal. With an unique menu that puts a nice spin on seemingly simple dishes, it boasts some great sandwiches and salads as well as more complex dishes. Homegirl Café is starting to flourish, releasing a line of chips and salsa in Ralphs stores in Southern California.

Homeboy Silkscreen and Embroidery does custom promotional items for teams, schools and businesses. The largest business of Homeboy Industries, it creates a large variety of items from clothing apparel to pens and calendars.

All of Homeboy’s businesses are valuable for providing jobs. They are just steps in the process – places to build skills and gain work experience. The goal remains to find permanent, meaningful employment for its participants. While many of those who come to Homeboy have concrete skills and are ready to work, others need job training to become strong employment candidates. People who might be hard to place in the workforce are hired into Homeboy’s transitional jobs to learn job skills and build experience.

As it has grown, Homeboy has seen the need for different services to support those seeking to move beyond gang life. Free classes and services are provided to meet different participants’ needs. These include: employment counselors working to find local jobs and talk with potential employers to tell them the benefits of hiring homeboys and homegirls, an on-site charter high school, GED preparedness program, tattoo removal, anger management, baby classes, substance abuse meetings and counseling and vocational training.

Homeboy Industries helps former gang members receive a second chance, something that otherwise might never happen. Those who have experienced it see that Homeboy gives a new life, opportunity and a future.

Art notes, “This place is my future. There was no future before.”