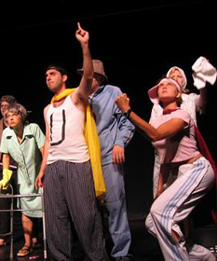 "In Skitsotopia, after your gay marriage, they scatter stem cells over the couple, and everyone gets legal abortions at the reception," says "Skits-O-Phrenia" co-founder Matt Plumb of this highly irreverent (and seemingly equally offensive) show. Along with co-founder Adam Schwartz, the show vows to smudge the lines of comedy and indecency beyond recognition as "Skits-O" combines the highest of the high-brow ("Fat Albert Camus") and the lowest of the low-brow ("Dildo Discrimination") into a smorgasbord of crying-with-comedic-tear vignettes that eschews everything from anti-Semitic toy stores ("F.A.No Schwarz") to Persia’s answer to RC Cola ("Farsi Cola"). Falling somewhere between art and questionable comedy it is, above all else, an exhibition. Hence, why it’s featured in this column.

Unlike the more traditional sketch comedy shows that spring up like mushrooms in your dorm room’s communal shower, "Skits-O" prides itself on being completely "uncensored" (expect nudity) and going after an audience that’s already schooled in sketch comedy conventions. Previous shows have included such works of art as "Brecht-Fast O’s" about the Bolshevik playwright’s foray into General Mill’s territory, and "Crazy Blind Date," which ponders why a woman’s sole role in skits seems to be saying lines like, "That’s horrible! I’m leaving!"

While MOCA or LACMA may be more appropriate first-date territory (unless your date enjoys commentary on dolphin rape), if you have any sense of humor, and want a litmus test of your partner’s, this is the second date. Every once in a while, a production will take place in a theater that somehow transcends the boundaries of the wooden stage and becomes as much a work of art as King Tut’s tomb. Upright Citizen’s Brigade did it. "Mr. Show" did it. And now, "Skits-O-Phrenia" does it. Expect to see its entombed remains in LACMA circa 3005 as evidence of a once-great comedic empire.