A Day to Remember: Won’t Forget Where They Started From 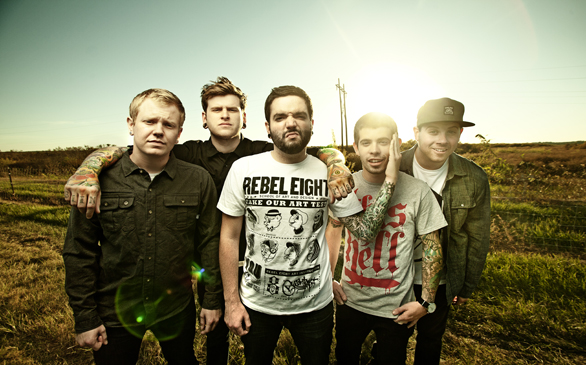 Few bands have shaken up their designated genres quite like A Day to Remember. Over the past several years they have garnered an enormous underground following with their high-energy live shows and unique blend of catchy and heavy.

Their sound is more or less a mashup of pop punk of the past, i.e., New Found Glory with some heavier hardcore elements of a metalcore act like Underoath or Killswitch Engage. The result is almost embarrassingly catchy, mixing sing-along choruses with massive power breakdowns and Cookie Monster vocals. While the mainstream potential of such a seemingly odd mixture proved initially impossible, A Day to Remember broke the ground into the airwaves of mainstream America with their single “Have Faith In Me” from their third release Homesick.

The band’s hybrid heavy/poppy style remains the band’s most unique contribution to the current music scene. Bassist Josh Woodard notes that “whatever kids get from it is cool with us. Some people come just to mosh in the pit, but if there are kids that just want to sing along and have fun during the pop parts that’s cool, too. We don’t like to pigeonhole ourselves with labels.”

Their latest album, What Separates Me From You, has taken the band on the road for what has become their biggest headlining tour to date. The album, which has already garnered some serious airplay on KROQ with its first single “All I Want,” has seemingly done the impossible by conquering both the mainstream and underground. What Separates Me From You peaked on the U.S. Billboard 200 at No. 11, quite an achievement for anyone let alone a young, hard-touring punk band.

A Day to Remember’s recent radio play has opened them up to a wide variety of new fans. Woodard remarks that What Separates Me From You has become their best-selling record to date and that this newfound mainstream potential has attracted new sets of ears.

“It’s been crazy,” begins Woodard. “There’s a lot more girls at our shows. We also noticed that about a year and a half ago a lot of people in the military started coming out for our shows. I’d imagine that they like to have something real heavy or aggressive to get them pumped to work and go on tour.”

The influx of female band love hasn’t jaded the young guns in the band. In fact, Woodard says that the band is hardly as full of Casanovas as one may expect.

“You’d think that as a band you’d get that kind of stuff that you see on TV or hear about from other bands, that that stuff would be more accessible, but it’s not anything like that. We are nerds,” explains Woodard. “After this, I’m going to go into the back lounge and play video games. Trying to hook up with girls is not our bag at all.”

Regardless of how the band feels about their recent success, they are most certainly not a small underground act any longer. A recent billing on the KROQ Almost Acoustic Christmas along the likes of the Smashing Pumpkins, Social Distortion, Vampire Weekend and the Black Keys would normally drive a band through the ego universe. This is apparently not the case.

“It’s one of those things that you’ll really have to meet us to get a grasp on it. It’s easy for people to say I’m not a diva and I’ve never let anything go to my head, but really we’re the same nerd loser kids that started this band,” Woodard says.

The juggle of pleasing both new and old fans will prove to be a challenge as the band grows and matures, but what can be assured (at least for the meanwhile) is that A Day to Remember will maintain their unique sound regardless of mainstream pressures.

Woodard concludes, “We’re going to continue to do what we’re doing regardless of what people say.”

A Day to Remember perform April 6 at the Palladium. For more information, visit adtrofficial.com.