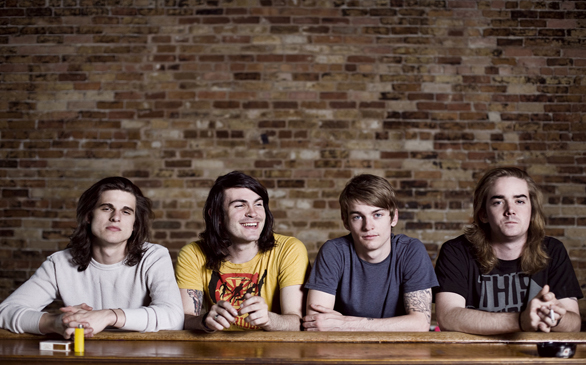 Bands these days, they grow up so fast. One day they’re posting their first self-financed live performance video on YouTube for the five people who will see it, and the next they’re enrolled in rehab for substance abuse. In a music scene increasingly marked by as much excess and vice as one might expect to find in mainstream pop and hip-hop, the pop-punk foursome of Anarbor have somehow mastered the art of aging gracefully. What’s more, they’re all only barely over 21 years old.

Despite their young age, the members of Anarbor have a pretty clear grasp on who they are and where they want to be, even if the rest of the music industry has other opinions about it. Vocalist/bassist Slade Echeverria, drummer Greg Garrity and guitarists Adam Juwig and Mike Kitlas just might bring some old-school influences to their genre, regardless of whether audiences can really appreciate it.

“It’s never been our concern,” Kitlas responds. “A lot of bands right now just want to sound like what’s out there already, whatever that up-and-coming sound is. We’ve always stuck with our roots and the type of music we like to play, and we plan on keeping it that way. If someone’s going to like our music, then they’ll like our music. We’re not out here to try and write songs for other people.”

Though they carry an air of blasé nonchalance and general apathy toward all that might be deemed popular in music, Kitlas and Echeverria are more enlivened when talking about their own music and just how divergent it is from “popular.” Even when covering and borrowing from actual hit pop club jams, as seen on their just released The Mixtape EP, the Phoenix-bred foursome still sound like seasoned rock ’n’ roll veterans. If the hints of big-sounding rock that The Mixtape suggest are any indication, the band’s next album could be a game-changer for their scene.

“We took a two-month break after the VersaEmerge tour, then started writing for our brand new record,” says Kitlas. “We have about 10 new songs, and we’ve just been at home demo-ing and recording stuff on our own, trying to get a feel for what our next record’s going to be like. We’ve just been really busy with writing.”

While Kitlas promises the new album won’t be too far a cry from their previous full length, The Words You Don’t Swallow, he and his band mates do have a few tricks up their sleeves to let loose while recording.

“Every day we’re getting older and experiencing new things, and this record goes with what we’ve always done with our music in trying to just be real and tell it how it is. We explain what we’re going through in our lives so kids can relate to it,” says Kitlas. “We’re a very guitar riff-driven band. Adam and I both love classic rock bands, the people who just get up there and shred. One of my favorite guitarists is Jimi Hendrix, and most of our influences come from older stuff rather than newer.”

Given the current state of the pop-punk scene that has yielded their audience, touring partners and genre brandings, Kitlas just might have his work cut out for him if he plans to bring some Hendrix in his shredding to the modern mid-teens of today. That said, Kitlas and his band mates do love a good challenge.

“Life doesn’t hand you anything. You’ve got to go out and get it. That’s like the definition of touring. You’re not just going to get big off of MySpace,” he says. “It sucks when bands do get big like that, but what are you going to do? Bitch and whine and not tour? No, you’re going to keep your head up, keep touring and hope for the best.”

And sometimes, all it takes is a quick reminder from fans to put things in perspective.

“Seeing kids singing along at the shows, that’s what makes us want to keep going,” says Echeverria.

What might at first have sounded like disinterest on Kitlas’ part is in fact quite the opposite. Kitlas and the rest of his band simply have a clearer view of things than those around them. For them, in the end, integrity and authenticity are king.

“We’re real dudes playing music that we like to play. We’re not faking anything,” says Echeverria.

Echoing this, Kitlas adds with a laugh, “We’re the same band on CD that you get when you come see us play live. We don’t have all this crazy stuff going on, we’re just a little garage band from Phoenix.”

The Mixtape is currently available. Anarbor perform April 2 at Chain Reaction and April 5 at the Roxy. For more information, visit anarbor.net.