Rebelution: Take It to the Next Level 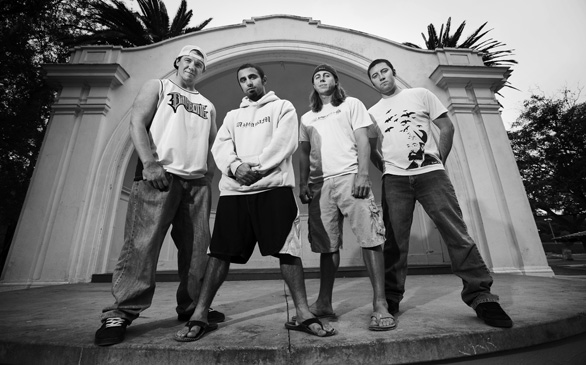 Located in the heart of Los Angeles’ Koreatown, the historic theater on Wilshire and Western will host one of Southern California’s homegrown reggae bands, Rebelution, set to perform on Friday, April 1.

Rebelution has its beginnings grounded by the beaches of the University of California – Santa Barbara, where the original members met and formed a reggae band in 2004. Now, Eric Rachmany (guitars, vocals), Marley D. Williams (bass), Rory Carey (keyboards) and Wesley Finley (drums) are finishing up the last leg of their Winter Greens Tour with stops closer to home. Williams is glad for the homecoming.

“We love the West, it’s where we’re from. We’ll try and soak up as much Santa Barbara and the vibes there as much as possible,” he says.

But before heading up the 101 Freeway, the boys stop to play in Los Angeles. Williams feels the prestige of performing at the Wiltern.

“We’re looking forward to the Wiltern show a lot. I think it’s one of those shows we’ve been talking about all tour. I’ve heard nothing but good things about it. I’ve been told it’s the spot to play at.”

Not only does word of mouth get him pumped for the show, but he also recognizes that this is the next step up for the band.

“It’s going to be a big show for us because usually we’ve done House of Blues and before that it has been the Roxy. The Wiltern is a big step for us.”

Williams states, “It’s going to be cool to have that crew together again. We had a lot of fun on the first leg.”

But the fun doesn’t stop on stage. As if a rocking concert was not enough to satisfy people, Rebelution wants to say thanks to fans for all their support by partying with them after. All concert ticket holders 21 and over are eligible to attend the after-party in the Wiltern lobby, featuring a set by DJ Yeti.

After their last show in Ventura, Rebelution go global, heading to Brazil for a brief tour. Then, it’s back to the States for music festivals in June.

However, just because their tour stops doesn’t mean the music has to. Rebelution is taking this time to work on a third album.

“We’ve got a few songs, and we’ve recorded them. But this time we’re trying to expand our sound. We’ve really established ourselves these first two albums, so we want to try and take that to another level,” Williams shares. Kicking it up a notch is “the mode we’ve been in for everything, our music, our tours, it’s our time to become better than what we already are.”

When asked further about how they plan on changing their sound, Williams adds reassuringly, “We don’t want to change everything. This is what got us here. This is what our fans like. We have a formula where we found something that is unique in the reggae/rock/hip-hop hybrid world. Because we are equipped with that, it’s OK to try and have fun. I would say we’re trying to push it a little bit to go in this direction or that direction a little bit more, not just what we’ve already been doing. People know our sound, and we have a unique one. So why not give something more with an R&B or a swing twist? It’s something we feel like we can reach out to more people who might have not listened to us before in the past.”

Though their sound might be expanding, Rebelution stays loyal to their motivational message: “We have a few love songs but also a few personal inspirational songs,” says Williams.

Nothing quite as politically charged as “Wake Up Call” though. Concert attendees can expect to hear a sampling of a few of their new songs at each show.

So when can fans expect this revolutionized Rebelution?

“When we feel it’s as good as it can be,” assures Williams. “Summer would be nice. It could be fall. You never know.”

I do know one thing, though: I have a feeling it’ll be worth the wait.