Leaf Cuisine: Lean, Green and Eating Clean on the Westside 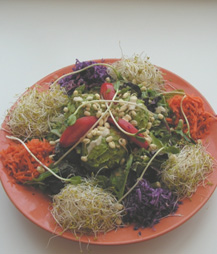 To say that founder Ron Rotondi is one of the pioneers of raw food cuisine would be an understatement. A world traveler, the well-cultured Rotondi studied under international chefs in Rome and Paris, paying his way through college and graduate school by working in restaurants. After building up 15 years of crucial experience, the young Rotondi moved to Egypt. It was there that he discovered a new way of preparing and looking at the ingredients we put in our bodies – as raw and living.

A working definition of raw cuisine is "ingredients that contain a seed" – put simply, fruits, nuts and vegetables. Any vegetarian meal prepared without cooking or heat is the heart of raw cuisine.

In 1996, Rotondi mastered this craft and displayed his knowledge for the masses in the United States at his flagship Rod’s Wrap and Juice Bar, in Massachusetts. The innovative eatery went on to win illustrious awards at the Marblehead Culinary Arts Festival.

While the raw food experience was still building on the East Coast, California was well on its way into the trend thanks to another famed advocate, Chef Juliano. Juliano reached out to Rotondi to move to the left coast, giving him the highest position of executive chef at Juliano’s Raw, in Santa Monica.

From there, Rotondi moved on and opened his own cafe that is not only affordable, but also housed in a relaxing atmosphere. Leaf Cuisine opened its doors in 2004 to many eager Westside neighbors looking for quick vegan/vegetarian cuisine. An artful hot spot for locals and newcomers alike, the café has a cheerful green decor that can immediately brighten up even the most skeptical consumer who has dared to venture into the world of vegetarianism.

From appetizers like Guacamole with Flax Seed Crackers ($4.95), soups like Middle Eastern Lentil and Miso-Carrot-Ginger ($4.95), to drinks like Homemade Agave-Ginger-Lemon Tea ($2.50), everything prepared in the kitchen is vibrant and flavorful.

At Leaf, the salad and wrap menu is heavily supported by "croquettes" – a combination of vegetables, nuts and herb pates shaped into medium-sized circles and dehydrated until they become crispy on the outside and silky on the inside. Choose from options like the Flying Falafel ($7.50), which features chickpea croquettes with a light tahini sauce, marinated onions, mixed greens, tomatoes and alfalfa sprouts or the Mediterranean Medley ($7.50) of sun-dried tomato and walnut croquettes immersed in a spinach pesto.

All of the selections on the lunch menu can be made as a wrap, which means rolled up in a collard green, or as a salad for an extra $1.95. If a collard green is not your style, add $.65 to your bill and order a sprouted grain tortilla – though be aware that it is not raw. Whichever you decide to try, the portion is very generous.

I recommend adding extra flavor to your wrap or salad by asking for extra house dressing ($.95). The combined flavors of creamed ginger and shoyu (fermented soya beans) add a little zing, especially to the Veggie Sunburger ($6.95).

If you feel like having a liquid lunch, Leaf offers eight choices, including the Blueberry Bonanza ($4.95) and Raspberries and "Creme" ($4.95), which of course is not a cream consisting of dairy, but a mixture of water and pureed almonds, commonly known as almond milk. Enhance your smoothie for $.95 with healthy boosters like flax seed oil – effective in accelerating the healing of sprains and bruises and lowering cholesterol – or the maca root that is reportedly known to increase the libido.

Convincing desserts like the Apple Pie ($5.95), which contains apples and dates enclosed in a date-nut crust topped with cashew "creme," and the Chocolate Brownie ($5.95) made with raw cacao and topped with "chocolate" sauce, whipped creme and walnuts are sure to please, and more than likely will guarantee your return to the world of raw cuisine.