Politics and Perception Played Roles in Moving The Kennedys 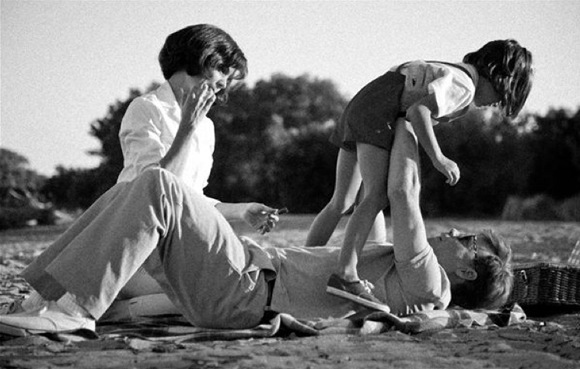 The night before he started filming The Kennedys last summer in Toronto, Greg Kinnear got his first inkling that the project might be headed for trouble.

Kinnear, tapped to play John F. Kennedy in the sprawling miniseries about America's premier political dynasty, was told that some of the family's high-profile defenders were pressuring the network over a show they were convinced would be a hatchet job.

"I didn't ask a lot of questions about it," Kinnear said recently, referring to his dinner that night with Nancy Dubuc, president of the cable network History, "because I had bigger problems on my hands, which was how the hell was I gonna play Jack Kennedy."

But the controversy soon became a big problem indeed for The Kennedys. In January, History decided to yank the $30-million miniseries off its schedule, saying it was "not a fit" for the network's brand, and slogged through an embarrassing and heavily publicized quest over the next few weeks to find a new home for the project. Media accounts suggested that the family itself had tried to quash the project, although no family member has publicly admitted to having done so.

On Sunday, The Kennedys will finally premiere in the U.S. on ReelzChannel, a little-known, family-owned independent cable network that's hoping the miniseries can instantly vault it into the big leagues of outlets offering splashy original programming.

Viewers will be able to judge for themselves the show's quality. But History's shedding of the project has already taken a toll. The channel will likely lose a substantial portion of its $15-million investment (the rest came from producing partners). The controversy has reignited an old debate about the importance of accuracy in historical fiction.

"A lot's wrong," said Cari Beauchamp, a historian and author of Joseph P. Kennedy Presents: His Hollywood Years," who watched the entire eight-hour miniseries at the Los Angeles Times' request. "They missed an incredible opportunity because what really happened I think frankly was much more dramatic."

Meanwhile, because History has had little to say about the history of its own decision-making in this case, ordinary viewers are left wondering about the slippery politics behind TV programming moves – just as they were in 2003, when CBS bumped The Reagans movie to its sister network Showtime after complaints from conservatives.

Joel Surnow, an outspoken conservative who was the creator of Fox's "24" and who executive-produced The Kennedys, views political cowardice as the hand guiding History's move.

"I truly believe that this project would have seen the light of day on History Channel if the exact same film had been produced by Tom Hanks and Steven Spielberg," Surnow said recently. Hanks and Spielberg have been connected with liberal causes.

"It always felt from the very, very beginning of the project that at one point my known politics as a conservative might be a problem," Surnow added. "I'd always assumed the Kennedy family might have an objection to their family story being told by somebody that they perceive to be not friendly to them."

But he said: "I've never had any political agenda" in producing the film, which he intended as a family drama.

Liberal filmmaker Robert Greenwald, who obtained early drafts of scripts for The Kennedys, attacked the project in the New York Times and on a Web site, stopkennedysmears.com. Historians who the producers say had signed off on the factual accuracy of the teleplay later withdrew their support (one of the historians who consulted on the project, noted presidential biographer Robert Dallek, did not respond to a request for comment).

Surnow and others insisted the producers took pains to be faithful to the known historical record. "If a prop guy came up and handed you a cigar, it was a vintage cigar from exactly that era," Kinnear said. "The wallpaper behind any wall you were in front of had been documented from photographs."

Historians, however, do not seem so impressed. Beauchamp, the historian who viewed the film, criticized the portrayal of President Kennedy: "He was a complex person, and the only things they emphasize are his womanizing and his pill-popping."

Whether such points will ultimately matter to most viewers remains to be seen. What is clear is that if there can be any winner in this tangled affair, it's likely to be ReelzChannel, which has reaped an enormous PR windfall. The digital network typically airs theatrical movies and movie-review programs and is available in roughly 56 million homes – 30 million to 40 million homes fewer than cable networks like FX and Bravo, which have cable and digital subscribers.

Chief executive Stan Hubbard said that as of late last month, the channel had sold more than 60 percent of its ad inventory for the broadcast. He's hoping The Kennedys will boost Reelz to the type of ratings seen for major cable networks and help it promote other shows.

The irony, Hubbard says, is that he thinks the Kennedy family itself never had anything to do with the controversy.

"If the Kennedy family really were involved in trying to get this thing killed, the day it was announced that ReelzChannel was picking it up, somebody would have reached out to us and said, 'Here's why we don't want you to do this,'" Hubbard said. "And that's not happened."