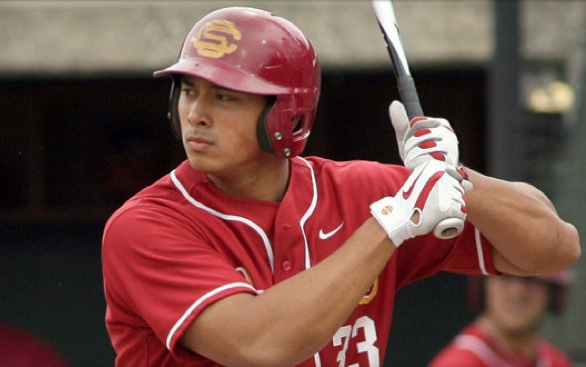 After playing one another, both USC and UCLA kept competing in Pac-10 conference action.

The No. 24 ranked UCLA Bruins saw action at home, entertaining the Washington Huskies for a set of three in Westwood. UCLA gained a sweep, winning by tight scores of 2-1, 5-3 and 3-2.

During the opening game of the series, junior right-hander Gerrit Cole pitched the Bruins (14-9, 5-1) to victory. Cole pitched a complete game, fanning 10 batters (for the third time this season), allowing one run and five hits. Cole is now 3-2 for the year with a 2.06 ERA. On top of that, he improved to 3-0 against the Huskies while striking out 32 in 25 innings of work. Despite a lack of offensive production, the Bruins saw sophomore outfielder Cody Keefer go three-for-four. Additionally, sophomore infielder Cody Regis went one-for-four with an RBI.

Meanwhile, USC traveled north to battle the No. 13 ranked California Golden Bears. The Trojans (10-18, 2-4) won the series opener, but lost the following two.

The Bruins have a four-game road trip, one at UC Riverside (April 5) and three at Washington State this weekend. The Trojans host four at home, one against LMU (April 5) and finishing with three versus Stanford (April 8-10).