Lakers Need To Be Careful 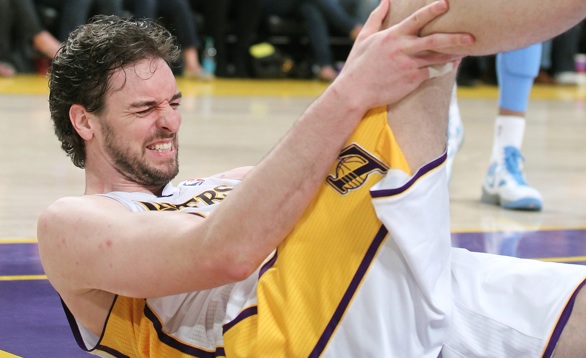 Despite a disappointing loss to the Denver Nuggets, the Los Angeles Lakers are just 2.5 games behind the San Antonio Spurs for the best record in the NBA. But the Lakers need to be careful with how they manage the remaining six games in their schedule (three on the road and three at home).

What do I mean by this? Well, whether the Lakers capture first place in the Western Conference or not, head coach Phil Jackson somehow is considering resting bodies to prevent injuries.

Sure, a lot of Laker players have speculated that a top seed for the playoffs is not important, but it will help them enormously come postseason play. And this is precisely true and a big factor if reaching the NBA Finals for a third consecutive year.

In addition to that, the Lakers need to be careful to not underestimate opponents with less talent than them. A prime example of this arrived Sunday afternoon in their 95-90 defeat to the Nuggets, who have won six straight games now.

“We just didn’t get the game under control, especially in the fourth quarter,” Pau Gasol admits. “We just gave them too many chances to the point where they believed they could take the game. And they took it. They’re a very versatile team, and they’ve got a lot of guys that contribute in different ways.”

Gasol finished the game with a double-double of 16 points and 12 rebounds, but was limited to just under 32 minutes because of a knee injury he suffered early in the second half.

“I jammed my knee pretty good,” the optimistic Gasol adds. “It’s sore, but they allowed me to play. So hopefully it will be nothing.”

The Lakers face the Utah Jazz Tuesday, April 5, before departing to the Bay Area for a road game against the Golden State Warriors the following day. Both contests tip off at 7:30 p.m.