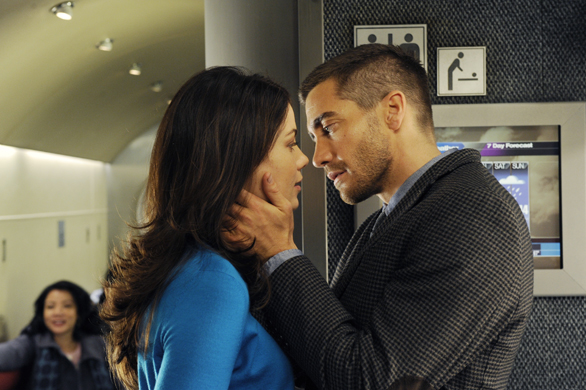 Opening with beautiful shots of Chicago, the camera zooms in on a commuter train. Captain Colter Stevens (Gyllenhaal) abruptly awakens aboard, startled and confused. He’s sitting across from Christina (Michelle Monaghan) who seems to know whom he is and wonders if he’s feeling OK. He rushes to the bathroom where he sees the reflection of another man in the mirror. The train blows up, and he wakes up in a small capsule where he is trying to get some answers. The few answers that are given to him come from a monitor where we see Colonel Goodwin (Vera Farmiga). She gives vague details, letting him know that he is involved in a secret program called the Source Code. He needs to go back to the last eight minutes of that train ride and identify the bomber because there is a much larger impending bomb threat.

Immediately you are drawn into the film and wonder where it will go. Stevens continues to awaken on the train at the same time, which reminds you of Groundhog Day or Twelve Monkeys. Although each time he goes back and the story begins in the same way, new twists and turns develop making you sit on the edge of your seat. You are rooting for Stevens to locate the bomber before the train explodes each new time.

Another key character is Dr. Rutledge, played by Jeffrey Wright. He is a bit of the mad scientist who developed this program. Though slightly underused, he adds a touch of crazy to the film. Source Code is an exciting action sci-fi thriller with heart.


Source Code is currently in theaters.
Article posted on 4/4/2011
This article has been viewed 1454 times.