All Time Low: Growing Up, Cleaning Up 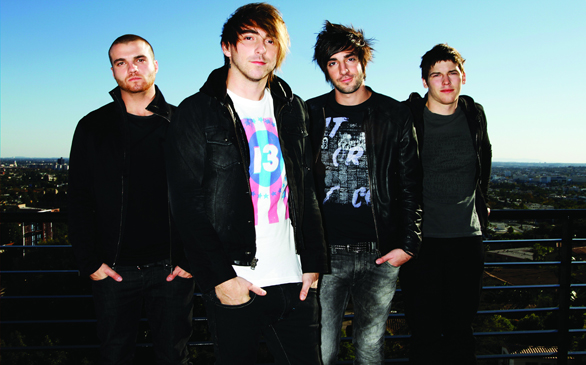 Though he jokingly states that such wisdom indeed comes from personal experience, therein lies the perfect introduction to what All Time Low is about: The youthful indiscretion that you laugh about in retrospect.

“Don’t tell me if I have any children, I’d rather not know,” he laughs.

Hopefully he’s actually joking about that one.

With the upcoming release of Dirty Work marking the band’s fourth full-length album, Barakat and his band mates – drummer Rian Dawson, vocalist Alex Gaskarth and bassist Zack Merrick – have grown up in a lot of ways managing to stay the same in quite a few others.

Given the constant demand for touring on their part, the Baltimore natives had to take a very different approach to writing and recording Dirty Work from the process they were accustomed to.

“Writing this album was a much longer experience, we started it over a year ago,” says Barakat. “Since we’re the kind of band that doesn’t stop touring, it was a lot of going into the studio for a couple weeks with whatever producer was doing a certain song, then going out and touring Australia or Japan or England, then going back into the studio, then going back out on tour, which is why it took so long,” he adds, with the knowledge that there has been some to-do among fans over the numerous release date shifts the album has endured.

“If we actually would have sat down and did the record all at once, I think we probably could’ve knocked it out in three or four months. But especially now in the music industry, you don’t want to disappear for too long, you have to stay as relevant as possible to make sure that you’re still on people’s radar.”

In order to solve the issue of locking down a release date, however, the band would first have to settle on actual songs to complete the album, which proved to be a daunting challenge in and of itself at times.

“There are a lot of songs that we recorded in the beginning process of the record, and then realized a year in that we don’t really like the songs anymore and they don’t really sound like us,” says Barakat. “Everyone’s creativity and musical tastes change over the course of a year. It was a cool way to do it though, because it was a nice test to see if the songs were still good after a year.”

Seemingly, the test proved successful for Barakat in the end, as he admits to have a personal affection for the album’s lead single. “I think ‘I Feel Like Dancin’ is one of my favorite songs I’ve ever done because it’s a great party song and we co-wrote it with Rivers Cuomo from Weezer. Weezer has always been one of my favorite bands, and it definitely has that kind of vibe to it.”

Along with their stylistic growth and seemingly meteoric rise to mainstream recognition, Barakat has noticed a distinct shift in the typical All Time Low audience at shows lately.

“The age range has definitely expanded. It used to be mostly 14- to 16-year-olds, now it’s expanded to 12 to 25 with all the exposure we’ve gotten,” he says. “There’ll be a picture of us in J-14 and an article about us in Spin, two very different demographics there. We’re not a band that’s biased toward anyone. We make music for anyone that wants to listen to it.”

“Luckily we have our heads on straight and we’re in tune with our fan base, where kids can expect to meet us after shows and can expect us to be the same people. That’s why our fan base has grown so significantly over the years,” says Barakat, adding with a laugh, “It’s almost like a cult. Without the Kool-Aid.”