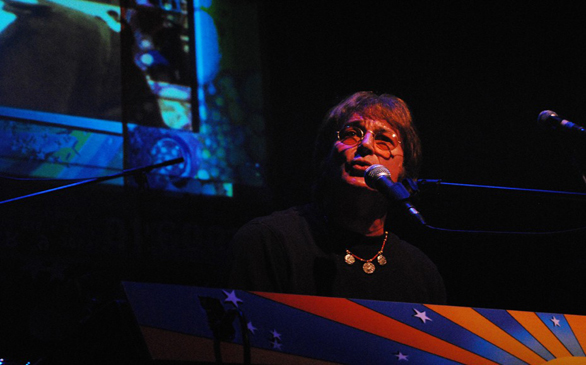 Just imagine walking down the street with all the lonely people where Wilshire Boulevard meets MacArthur Park and you stumble across the Hayworth Theatre where the marquee isn’t even lit on a Friday night. Just when things could go terribly wrong, they pleasantly go terribly right.

Hidden away in this intimate theater is a treasure named Tim Piper who leads his audience on an unforgettable nostalgic look at John Lennon’s life in “Just Imagine.” The iconic Lennon’s music is entertaining enough, but Piper monologues a historic background of the once-Beatle. He shares stories of Lennon’s life that, for those who’ve heard them, provides a chuckle or even tears. And for those who haven’t heard the behind-the-scenes happenings of Lennon’s times, you will be educated on his harsh personal life.

Piper’s memorable performance is pitch perfect and while at first the monologue seems forced, it grows on you. To back Piper up is a groovy and impressive band that puts this generation’s musicians to shame. Piper has been touring and performing as Lennon for years now, so for this show to “look back on his life” works for Piper to be on the older side. And even though Piper is an outstanding entertainer, it does make you wish you’d caught him in the role about 15 years ago.

Lennon’s authentic clone will wow you with his renditions of “Strawberry Fields,” “Can’t Buy Me Love” and more. He even steps back to become intimate with the audience in an acoustic set without his backup band as he plays hits by request like “Across the Universe,” which is priceless and touching. You won’t want to miss Piper portray Lennon in this unforgettable performance.