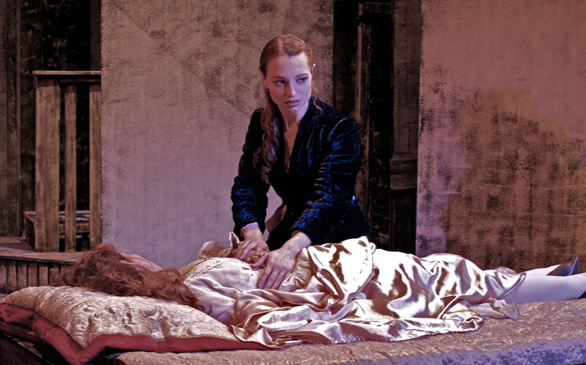 “Othello” is one of my favorite Shakespeare plays. Iago’s wife Emelia is Desdemona’s lady at hand. Anything Desdemona needs, Emelia is there to help. Desdemona is married to Othello, Moor of Venice. Iago works for Othello, but has some serious insecurity issues. He’s one jealous son of a gun. He fabricates stories about almost everyone involved in the play just to be an ass.

One day Emelia finds this handkerchief on the ground that belongs to Desdemona. It was a gift the Moor had given to her as a token of his affection. She dropped it by accident. Turns out, Iago has been nagging Emelia for some time about getting hold of that handkerchief for his own selfish motives. So when Emelia surprises him with it, he goes straight to Othello and tells him that his wife is having an extramarital affair and that he has proof. Othello looses it, Iago gets caught and everyone dies. This is why I love Shakespearen tragedy. The drama is beautiful!

In this adaptation, Melissa Collins’ Emelia is one of the better performances of the night, as is Jonathan Redding’s Iago. Both are clear with their delivery and have great physicality, not to mention their chemistry is the most entertaining of the night. Redding’s energetic and sinister Iago leads the entire production.