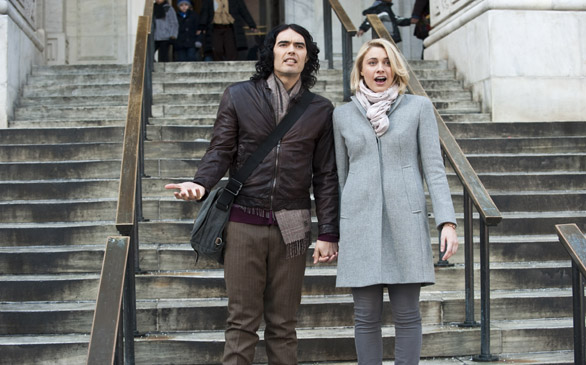 When unemployment numbers still hover in the double digits and many people face the choice between having health insurance or paying their rent, it can be difficult to relate to a character who squanders money on total frivolity, has no skills or responsibilities but lives in the lap of luxury. That is, unless you’re talking about the loveably lascivious whirling dervish also known as Russell Brand.

In his new film, Arthur, a remake of the 1981 Dudley Moore-Liza Minnelli original, Brand stars as Arthur Bach, a billionaire man-child overseen by his nanny, Hobson (Helen Mirren), who faces losing his inheritance if he chooses love with a spunky tour guide (Greenberg star Greta Gerwig) over an arranged marriage.

Directed by Jason Winer, the co-executive producer and director of “Modern Family,” and written by Peter Baynham, the man responsible for Sacha Baron Cohen’s outstanding mockumentaries, Borat and Brüno, the film’s cast and crew are well aware that their film depicts a side of life few can relate to, but that’s what makes it such fun to watch.

“Arthur’s world is escapism,” Winer explains during a press conference for the film.

Mirren adds, “This movie is for anyone who has ever bought a lotto ticket.”

She’s also willing to admit that being a famous actor has financial perks not unlike Arthur’s. When the cast is asked what their greatest splurge has been, Mirren admits with slight hesitation, “A castle in Puglia. It’s in the bottom of the heel of the boot of Italy. It’s been like turning the taps on full and money just pouring out.”

On the other end of the spectrum is Gerwig, a heavy hitter in the world of mumblecore independent cinema inching her way into the waters of Hollywood with recent turns in films like No Strings Attached.

“Umm, I still live with roommates,” she giggles. “My biggest indulgence is flying home to Sacramento more.”?

“What?! At this time of economic suffering? You fat cat,” Brand chides, before sidestepping the question by saying, “We all know the greatest poverty one can have is to be lonely.”

Remaking Arthur, with or without our current recession, has been a sticky subject from the beginning as loyal fans of the original decried a reboot.

“At first, I was skeptical,” Winer admits. “Arthur was one of my favorite movies when I was a kid, and it was in heavy rotation when my family first got cable. It was this awesome naughty glimpse into adulthood.”

Calling it “a mix of comedy, drama and a love story,” Winer says “it’s the kind of movie studios might not make anymore were it not for the comfort of the title.”

However, everyone felt, with the right combination of elements, starting with Brand signing on to star and produce, it could be remade well. Once Brand, who adds, “I love the original! Dudley Moore is a great inspiration of mine,” was onboard, they set out finding the right female leads.

Mirren, who recalls that on the second day of shooting she had to punch Brand in the arm and tell him, “Stop respecting me,” says the film was “an education for me. I’ve never done a film that was called a comedy before. That was one of the reasons I wanted to do it.”

Gerwig reveals she was “a huge fan of Russell,” before going into audition to be his love interest.

“Like most Americans I discovered him in Forgetting Sarah Marshall,” she says, “and then I watched all the deleted scenes on the DVD and his YouTube videos. I had such a crush on [him]! But in a schoolgirl way.”

“Yeah!” Brand grins. “We had already seen tons of actresses and [after Greta left], it was the end of the day and I was all quiet and Jason said, ‘What’s wrong?’ and I said, ‘I’m sad now that she’s gone,’ because I’d so enjoyed playing with her.”

“And I made you laugh!” Gerwig beams. “One beautiful time.”

“She made Russell break. And it was the first time I’d seen that happen,” Winer says. “I saw this sweetness that she brought out in him that I really wanted to be in the character.”