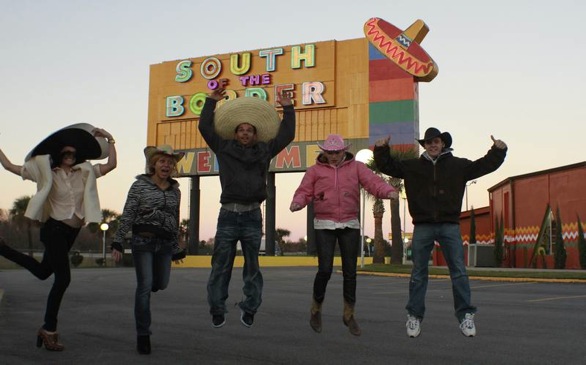 Most girls usually spend their sweet 16 obsessing over the right dress, partying all night with friends, and if Mommy and Daddy are financially stable enough, enjoying a pimped-out new ride they can show off at school the next morning.

Not Saoirse Ronan. The star of the upcoming action-thriller Hanna spent her 16th birthday beating up Eric Bana, jumping out of windows in Berlin, Germany, and then squeezing in a Lady Gaga concert at the end of her hectic day.

Saoirse (that’s pronounced Sur-sha) plays the titular character of the film, a young girl raised in the snowy wilderness of Finland and trained as an assassin by her rogue CIA agent father, Erik (Bana). It is soon after her separation from him when Hanna’s purpose comes into focus. Enter Academy Award winner Cate Blanchett, who plays Marissa Wiegler, a figure from Hanna and Erik’s past and the ruthless operative behind the mission to capture them in a deadly game of cat-and-mouse that extends across Europe.

The role was clearly a physical challenge for the petite Ronan. She had to go through a regimen typically suited for adult male action heroes: “I trained for a couple of months before I started [shooting]. I would do about two hours a day in the gym. I’d do weight lifting and treadmills and bench pressing. I did martial arts as well for two hours in the evening.”

Bana backs her up while describing what it was like fighting a teenage girl nearly half his size.

“She was really well prepared and trained really hard,” he says, “so I was actually concerned for my own safety!”

As for the Aussie star himself, the training he had to endure for a pivotal fight sequence in a subway station came with added pressure – the elaborately choreographed combat had to be captured in one take. There was little room for mistakes, especially with the short window of time given on location.

When asked if she always wanted to play an ass-kicking heroine, Ronan takes a moment to think and answers, “It wasn’t really something I thought about, to be honest. I’ve always been quite an active person, especially when I was younger. I used to play lots of sports. I always thought it would be fun to incorporate that physical work in a dramatic piece.”

For the young actress, working on Hanna was also a reunion with director Joe Wright (the pair had previously collaborated on 2007’s Atonement).

“It was fantastic,” she says. “The relationship we had on Atonement kind of followed through into Hanna and just developed even more so.”

Music junkies will be happy to hear that another character in the film is the hard-hitting score, courtesy of the world-renowned Chemical Brothers. Being a fan of the electronic duo, Wright jumped at the chance of working with them.

“I went to their first concert in London in 1992, and I’ve been a groupie ever since,” he says.

Having the Brothers compose a few tracks before any scenes were shot was a method the director deliberately implemented. The result is an exciting blend of organic sounds with a high-energy pulse that heightens the action. During a few scenes one can’t help but flashback to 1998’s Run Lola Run.

If Hanna appears to be a different kind of film compared to his previous films, which were highly regarded literary adaptations, the observation isn’t lost on Wright.

“It was a lot freer making this movie,” he says. “There was a lot more improvisation. One could go anywhere and do anything, and that was really liberating.”

The film proves itself as a socially conscious action flick with inspirations taken from old French thrillers, the atmospheric David Lynch and the kinetic camerawork of Paul Greengrass – all mixed in with Wright’s poetic visuals and original touches.

But back to that Lady Gaga concert. When I tell Saoirse that I’m planning to do the same for my own birthday, she can’t help but shriek with delight and relive her own memorable night at the Monster Ball: “I took Joe Wright with me. He actually invited himself, and we were in the pit of the 02 Arena. Everyone was going crazy!”

“I felt rather old and rather straight,” Wright deadpans. “But I did enjoy it.”

Interviews
Lily James and Sebastian Stan find a real relationship at the heart of 'Pam & Tommy'
157 views
Interviews
Ricky Gervais knew people would be mad about his new Netflix special. He did it anyway
776 views

Interviews
The star of Oscar-nominated 'Flee' gives his first interview: 'I wanted my story to be seen'
1,152 views

Interviews
'Crazy Rich Asians' made Henry Golding a star. Now he's showing Hollywood everything he can do
845 views