Born to Be Wild 3D 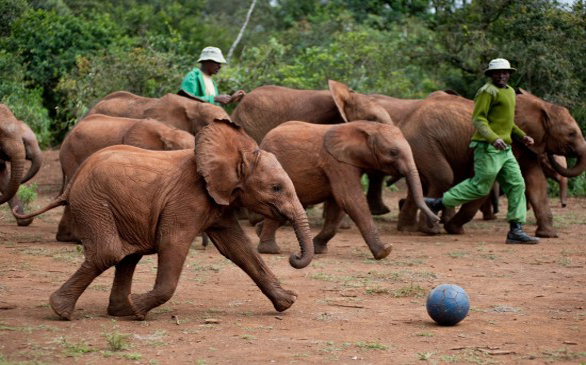 Born to Be Wild 3D is the kind of film that can change the world. Clocking in at a woefully brief 40 minutes, this incredibly beautiful and moving IMAX film tells the story of two women who have dedicated their lives to helping orphaned animals.

In Kenya, Dr. Dame Daphne M. Sheldrick runs a haven for young elephants whose mothers are lost to drought or, more often, greedily slaughtered by poachers, while in Borneo Dr. Biruté Mary Galdikas has spent her life caring for orangutans who have frequently lost their mothers to deforestation by logging companies and palm oil plantations which level the great apes’ natural habitat and kill the elder orangutans.

Narrated by Oscar winner Morgan Freeman, who so movingly led audiences along March of the Penguins, Born to Be Wild 3D begins with a small trunk creeping over a wooden door and toward a trough of water. Too adorable to seem real, when the first small elephant head pops into frame, so close you feel you could feed the baby pachyderm a peanut, an overwhelming feeling of delight draws coos from the audience. Soon after, when a baby orangutan, looking startlingly human, is lulled to sleep with belly rubs and a song, it’s all you can do to resist the urge to cry, “I want one!”

It’s thanks to film’s sense of wonder and sweeping visuals, that director David Lickley is able to parlay the plight of these beautiful, tragically endangered creatures – seen playing soccer, guzzling bottles of milk and valuing things that humans understand so well, like community and family – and compel the audience to understand that as much as the film is entertainment, it can also be a cry for action.

Heartwarming tales of pure love and kindness are hard to come by. Born to Be Wild 3D is an example of the best in both humanity and nature, filmed with impeccable artistic vision.

Born to Be Wild 3D releases in theaters April 8.