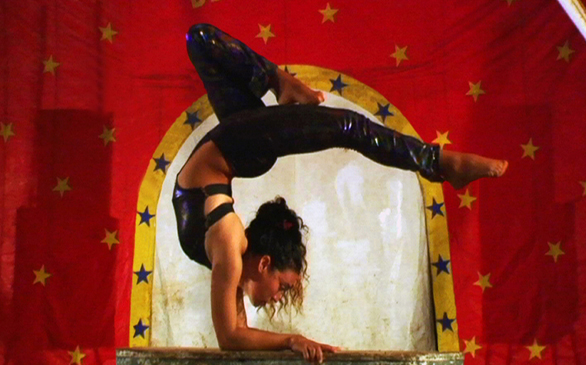 The idea of documenting a circus family might sound outdated, but somehow Aaron Schock finds a way to craft a film that makes you care about this unique family while simultaneously getting you to think about whether the circus life should still exist. The film starts off with a shot of light bulbs dangling from a string, immediately throwing the viewer into the spotlight-happy yet despondent world of the Ponce family, the hard-working members of Circo Mexico, a traveling circus act in Mexico.

As one of the ringmasters Tino Ponce aptly states, the audience thinks living and working in a circus is beautiful. But Schock makes it clear that it’s quite the opposite. Though at times his partiality towards certain persons is obvious, at other times Schock lets the shots speak for themselves. The cries of a little girl who just wants to stop practicing her contortionist tricks reverberates inside the viewer’s head, no matter how many circus documentaries they’ve seen. With visually engaging shots, Schock shows the viewer the huge disparity between the ever-traveling world of this family and the tranquil, more average lives of the regular townspeople.

It is Schock’s attention to detail that lets this story be touching without beating the viewer over the head with obvious emotion. The tired looks and gestures of the children, the juxtaposition of Tino’s niece going to school and Tino’s daughter putting large amounts of makeup on her face before a performance serve to get the message across that this life is not necessarily what is best for the children.

The film not only comments on this particular family’s life, but also uses their individual stories to comment on a lifestyle that to most Americans is virtually extinct. Yet the issues that Circo highlights – fragile marriage, stunted childhood, financial instability – manage to transcend any time period or location. Though the circus lifestyle is something that many people might find hard to picture, Schock creates a film that doesn’t look at these circus people like freaks, but as real people struggling to make a living.

His cinematography perfectly feeds off the emotions and struggles of the film’s personages, and Schock creates a work both visually intriguing and emotionally engaging. Once the viewer sees the hanging light bulbs again at the end of the film, these shining lights have taken on new, more complex image