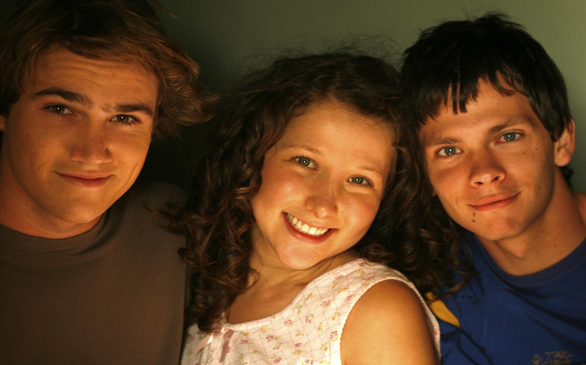 Movies, in practice, should come one of two ways. There is the hyper-realized way, where everything counts for two. A gunfighter scrunches up his face and spits a plug of chaw to the ground and then goes completely stone before all hell breaks loose in an eruption of cowboy gunfire. Think of anything by Sam Peckinpah or Sergio Leone. Then there is the realized version where all style is played straight and restraint is the key word. Think passive emotion and suppressed action in the vein of Harmony Korine or Wes Anderson. You can go either way with success, but you find yourself in trouble when you try to take that middle road. That’s where Exodus Fall finds itself, stuck in the middle road and unable to make up its mind.

When Kenneth (Jesse James) finds himself and his two siblings (Devon Graye and Adrein Finkel) at the helm of a flat tire in the opening scene of Exodus Fall with a stranger (Alexander Carroll) quickly approaching, the table is suitably set for the type of direction this movie is going to tack. In this case, that isn’t a good thing.

Exodus Fall is a movie about ordinary kids with nothing special about them, bound by experience that isn’t all that dramatic. They’re running from a mother (Rosanna Arquette) who isn’t particularly wicked or cruel. They team up with a stranger that isn’t all that strange or engaging to embark on an odyssey across the western half of the United States to reach their respective destinations before life or the law catches up to them.

They laugh, they cry, they tell stories; they sit around campfires and share experiences through a camera. They learn about each other in unexpected ways, and this is all what you would expect from a good road picture, a physical journey as well as an emotional journey. But in Exodus Fall, you never really care.

You want the hyper-realized version of this movie, or the realized version. Instead, directors Ankush Kholi and Chad Waterhouse frustratingly split the difference and give you something in between. It feels like a movie with a noose around its neck struggling to get free. It feels like a movie trying to slow down into a thoughtful piece with restraint and relish. Exodus Fall seems like an argument between two directors trying to make their way through an able premise with neither one ultimately getting the upper hand.