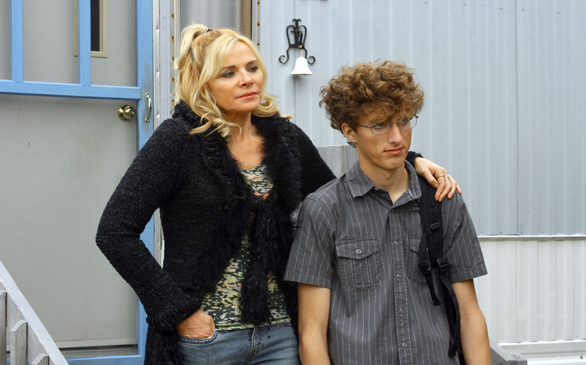 Growing up is never easy. There are tough lessons, awkward moments and often heartbreak to deal with. Growing old is no picnic either. You have to put up with grown-up stuff like tough lessons, awkward moments and heartbreak. But it’s all a strange and wonderful journey. That is the underlying theme in Meet Monica Velour, in which a teenage nerd fresh out of high school makes a journey to meet his idol, an adult film star from the ’80s. In the film by writer-director Keith Bearden, Tobe, the inelegant and edgy teen (played by newcomer Dustin Ingram) is confronted immediately by some coarse realities when he becomes acquainted with his porn star idol Monica Velour (played by Kim Cattrall), who is a dysfunctional, washed-up 49-year-old mom living in a trailer park. The two embark on an odd love affair of teaching, learning and self-discovery as Tobe attempts to woo his sex heroine, and she in turn educates him in the ways of love. Through their union, each finds a new path to take in their lives, and a new friendship is ultimately kindled.

Meet Monica Velour is an endearing comedy about aging, love, friendships and disposable culture. Set in rural Indiana, this film has an air of old-timey American values. Tobe has a devotion to nostalgia, although a quirky one, collecting old adult films and listening to 1930’s big band music. During his adventure, Tobe also befriends an aging artist named Claude (played by Keith David), who offers him some old-fashioned guidance to pursue his love interest. Tobe’s grandfather “Pop Pop” (played by Brian Dennehy) adds another aspect of peculiar traditional style, reminiscing to his grandson about the way things were.

The film is shot in a very warm fashion. Its sharp but cozy look adds to the offbeat, intimate moments that the characters share. The cinematography is wonderful, with a lot of beautiful American heartland images and uncomfortable close-ups. In several scenarios, Tobe wanders through the rural landscape, giving us a chance to ponder his intense but reserved emotions. Later, when on top of the world, we see Tobe dancing in his underwear in a scene that is pure funny. A subtle and charming composition ties the film together to be what can be best described as a cute, heartfelt statement on America.