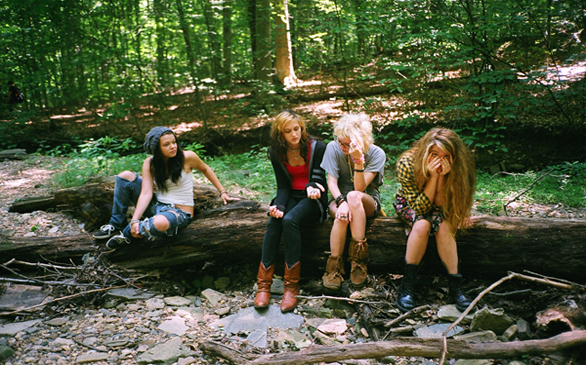 Putty Hill is a remarkable independent film from second-time director Matt Porterfield, and it is loosely based on his own experiences growing up in the outskirts of Baltimore. Understated, but never boring. Beautifully shot, and bereft of gimmicky camera tricks. Putty Hill is a simple story, well told, mixing traditional narrative and cinema vérité, which has certainly been done before, but never so effortlessly as it is here. The film has all ready been showered with glowing reviews. Everyone seems to agree, as do I, that Mr. Porterfield is a serious talent, and one that will hopefully continue to make films as accomplished and as mature as this one.

Putty Hill takes place in Baltimore, but not the flashy, gritty Baltimore of, say, “The Wire,” but the outskirts, the suburbs. The events of the film take place shortly after the death of Cory, whom the audience never sees, and only learns about through the interactions of several friends in the neighborhood. Strangely, the audience begins to realize that they may know just as much about Cory as his supposed friends do. We witness these young adults try to cope with death through everything from karaoke to a trip to the local swimming hole, though it never seems that Cory’s death is what really troubles the teens. Instead, they seem nullified by their own listless existence.

Putty Hill is a slice-of-life type of film. There are no gunshots or explosions, no anarchic editing, just intimate moments caught on film, genuine emotion on celluloid. The cast is made of mostly unknowns, which only helps cement the feeling of authenticity that Porterfield is shooting for. While you watch this group of young people come to terms with Cory, and just where Cory’s life derailed, you are really watching the group of friends coming to terms with their own mortality.

If Porterfield continues making films as good as this, he could very well end up crafting the next American classic.