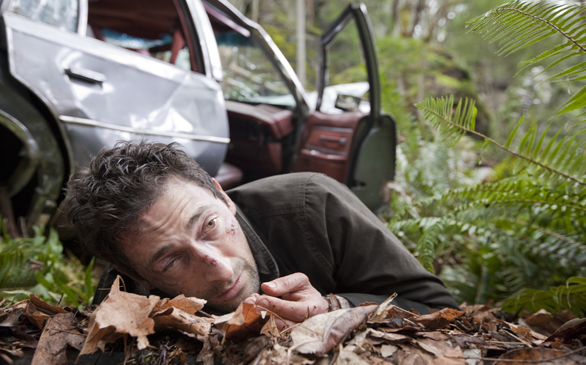 Wrecked is the feature film debut of director Michael Greenspan, and it stars Oscar-winning actor Adrien Brody. The film is about one man’s isolated journey through the wilderness, having survived what must have been a harrowing car crash. Besides cuts and bruises and a busted leg, he also has a pretty serious case of amnesia. He can’t even remember his own name, a fact that is nicely illustrated in one of the film’s more understated moments.

Wrecked joins the ranks of Rodrigo Cortés’s Buried and Danny Boyle’s 127 Hours, in that the powers that be have wisely married the concept of minimal locations and talented thespians. You can squeeze an awful lot out of an actor that isn’t afraid to work hard in order to sell a completely believable performance. Lucky for Michael Greenspan that Brody is just that kind of actor, because he is eminently watchable and easily carries what is otherwise a very low-key outing.

The film concerns an injured man that is desperately trying to make it back to anything resembling civilization, and the underlying question that plagues his amnesia-riddled mind, as well as the audience’s, is just what kind of man was he? He doesn’t know, and since the film opens post-accident, the audience doesn’t know, either. Luckily, there are a couple of folks that were in the same accident, though they haven’t survived, but they all have bits of information on them that help Brody’s character piece together the puzzle … and that’s before he starts having hallucinations of a mysterious female hiker (played by Caroline Dhavernas) that he may or may not have killed. To go into more detail would be detrimental to your enjoyment of the film, as the mystery is the story.

This is Brody’s show, though a handful of actors appear for a few fleeting moments, and he sells the action through the entire running time. If you like Brody, or if you’re the kind of filmgoer that enjoys a really spectacular actor’s showcase, then I would heartily recommend Wrecked.

The big misfire is the direction. There are touches of style in a couple of shots while Brody’s character is trapped in the wrecked automobile, but once he starts roaming the woods, compositions feel a little flat, a little long and a little uninspired.