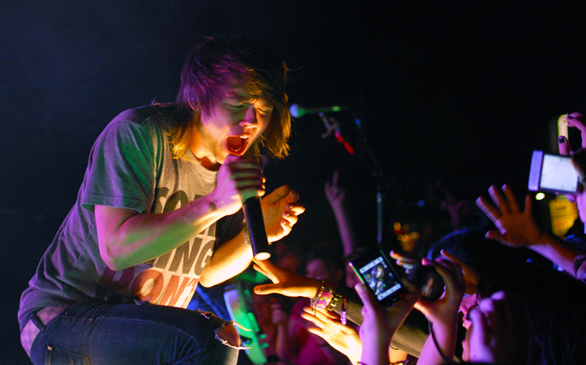 Electronic pop act the Ready Set continued a nationwide Glamour Kills tour while promoting his debut album, I’m Alive, I’m Dreaming. The Ready Set is the stage name for singer Jordan Mark Witzigreuter, and he and his accompanying band caused a shouting frenzy at the Roxy as hundreds of fans screamed with excitement. Once the curtain raised and the thick layers of fog disappeared, a series of flashes triggered across the floor while everyone followed Witzigreuter with their cameras.

The night instantly became a sing-along as the audience added a high-pitched choir sound to each song. Band members travelled across stage as they stood on LED flash boxes while posing before the crowd. The audience grew louder after every song, causing Witzigreuter to extend the microphone over their heads as they provided lyrics at every opportunity. Songs “Love Like Woe,” “More Than Alive” and “Young Forever” provoked ear-piercing screams from the teenager-filled venue.

Witzigreuter showcased his musical talents by having short solo performances at a piano and then switching over to drums as the band participated. Before concluding their hourlong set, band members tossed assorted colored neon glow sticks into the crowd as they illuminated the place by waving them in the air.