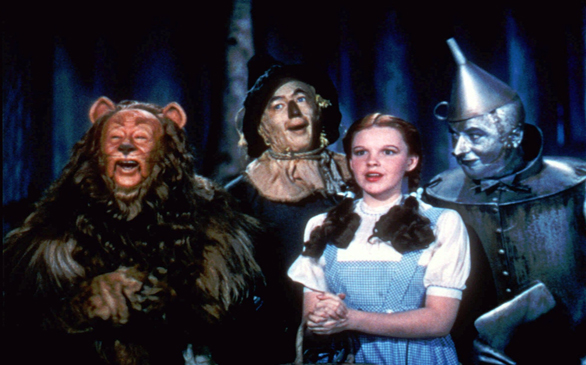 Dress up like your favorite Wizard of Oz character and sing-a-long!

It’s a truth universally acknowledged that I love me a good musical. If the choreography is right and the songs are catchy, I give my support to the film genre its opening night, as well as several more showings during its theatrical run. There is something particularly comforting about the musical, a warm and fuzzy feeling that comedy alone can’t stimulate.

Historically, the movie musical was a natural development from the stage musical, and the film musical maintains some remnants of the theater. Actors perform the song and dance as if there was an audience behind the camera’s barrier, watching along with the camera lens. The first musical films were shorts made by Lee de Forest between 1923 and 1924, although these and others from this time featured a musical soundtrack without synchronized sound.

The Jazz Singer (1927) was not only the first film to feature synchronized dialogue, but it was also the first feature film that was a musical. By 1930, Hollywood released over 100 musicals in that year alone, causing the American public to become so oversaturated with the genre that studios cut back. Only 14 musicals were released in 1931.

Director Busby Berkeley revived the genre in 1933 with films such as 42nd Street and Gold Diggers of 1933. Berkeley was known for infusing the musical numbers with brilliant routines that arranged human bodies in formations that could not possibly fit on a stage and that formed a kaleidoscope pattern meant to be viewed from straight above. Fred Astaire and Ginger Rogers became popular personalities in this era for their films, Top Hat (1935) and Shall We Dance (1937).

In the 1940s and 1950s, Metro-Goldwyn-Mayer hit it big when Arthur Freed headed a smaller production unit of the studio that focused solely on updating the old musical form. With his team, Freed produced such memorable films as Meet Me in St. Louis (1944), On the Town (1949), An American in Paris (1951) and Singin’ in the Rain (1952).

The 1960s reaffirmed the popularity of the traditional musical with West Side Story (1961), My Fair Lady (1964) and The Sound of Music (1965). Though she can’t professionally sing any longer, Julie Andrews will still forever be our queen of the movie musical.

Then came the postmodern era of filmmaking that influenced the musical in an interesting way. Children in the 1990s were raised on Disney musicals like The Little Mermaid (1989) and Aladdin (1992), to name a few. Film auteurs took hold of the genre and shook it up at the turn of the millennia. Baz Luhrmann directed both the highly popular Moulin Rouge! (2001) and lesser-liked Nine (2009).

The musical will never go out of the theater completely, as long as we still support the efforts of filmmakers and encourage exhibitors to show them. In January of 1995 for their second event ever, Alex Film Society presented The Wizard of Oz (1939) on the big screen at the Alex Theater in Glendale. They have had over 100 events and only repeated one until now. They are rescreening The Wizard of Oz, but adding an exciting twist. They’re letting the audience sing along. For the Sing-A-Long Wizard of Oz, the movie experience is turned interactive. The Alex Film Society is encouraging attendees to dress up as their favorite characters on Saturday, April 9, for two showings at 2 p.m. and 8 p.m. It’s an event for fans of all ages to relive the moments we were raised on. (Remember the first time you saw the Munchkin Land in all its colorful glory? Magical.)

I have been to a Sing-A-Long showing for The Sound of Music, and it was possibly the most fun I’ve had in quite some time. The organizers of the event go all out on keeping the fun going throughout the film. A little advice: If you haven’t seen The Wizard of Oz before, I don’t recommend you see it in this setting for your first time. People tend to get rowdy, singing along and yelling out the dialogue. Almost comparable to the infamous midnight screenings of The Rocky Horror Picture Show (1975), these Sing-A-Longs are taken seriously, so only those serious about participating should attend.