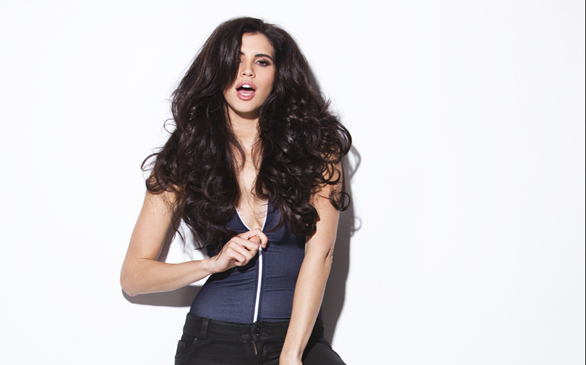 It would be easy to mistake Hope Dworaczyk (pronounced Der-Ah-Cik) for just another Hollywood pretty face with a bubbly personality. The halls of entertainment are filled with them. They host shows you watch every week and star in reality fodder that you talk about at the water cooler on Monday. The emphasis has never been on your mental acumen; it’s ultimately been how many advertising dollars your smile can deliver or how many seats you can fill with a flex of the bicep. It’s an accepted fact, and you’ll enjoy your movie and the popcorn that goes with it if you don’t concern yourself with Lindsay Lohan’s I.Q.

Dworaczyck would appear to be a welcome exception with the career course to prove it.

“I’m just a normal girl from Texas who loves to work and loves my job,” she offers.

She has been a busy girl and her accomplishments prove it, even if you only recognize her for her face and her 34-23-35 stats. Starting out as a runway model while still in her teens, she did work for the likes of Robert Rodriguez, XOXO, Rosa Cha and Miss Sixty.

It was while doing runway work that Dworaczyck considered testing for the 55th Anniversary Playmate search.

“I didn’t know if it would be a good thing or a bad thing. The first person I went to was my grandmother. She was excited and said if I had the opportunity I should go for it,” she says.

Grandma’s advice paid off and Dworaczyck secured the April 2009 cover with Seth Rogen, and the centerfold. She was later crowned 2010 Playmate of the Year and included in the June 2010 issue, which was notable for being the first Playboy centerfold with a 3-D foldout.

Dworaczyck leveraged her Playmate gig into a run on this season’s “The Celebrity Apprentice.” If you’ve been watching the show you might have missed her in spite of her feminine charms. She resides outside the petty wars and constant squabbles that make up the show, and her strategy has seen her through the first few episodes.

“I don’t get into a lot of the catfights that you see these women get into. I’m really not that person,” she assures.

The person that she isn’t has become patently obvious. She’s not a screamer or a bully. She conducts herself like a lady at all times and continually dispels the stereotype of a high-maintenance diva.

“I went into the show wanting to win money for my charity,” she explains.

The charity that she is playing for is Best Buddies, an organization that creates opportunities for one-on-one friendships for people with developmental disabilities. Looking for some insight into how the season evolves, I asked Dworczyck if her goal was accomplished, and her reply was simply practiced and suitably coy, “I can’t tell you if I did that or not.”

If she’s going to win for her charity, she’s going to have her hands full. Dworaczyck is competing with a cast of characters that would drive Mother Teresa to commit infanticide: Gary Busey, Lil Jon, José Canseco, NeNe Leakes and the recently fired Dionne Warwick. Dworaczyck doesn’t mince words when describing the recently departed Warwick.

“She was mean, rude and evil. She could have been nicer.”

But Dworaczyck isn’t under any illusions about what makes “The Celebrity Apprentice” tick: “When you get a cast like that, you know that something is going to happen,” she states.

It’s this not-so-subtle mix of personalities that makes for compelling TV, and it’s what makes “The Celebrity Apprentice” so watchable years after its first incarnation. It’s the firebrands and the intellects. The ones who are just a little bit crazy mixing with the ones who are terminally pragmatic and type A. You throw them all together and you hope for some fireworks, and you’re rarely disappointed. This stuff writes itself.

And in the middle of it all you have Dworaczyck playing her own subtle form of gamesmanship. Played slow and thoughtful, she would seem to have a strong run on “The Celebrity Apprentice.” And when it’s all over, with her possibly holding Donald Trump’s crown, maybe my fantasy will be realized. Dworaczyck refereeing a celebrity deathmatch between Hugh Hefner and Donald Trump.

“Hef would win. You have to think of Hef in the ’60s. He’d definitely have more people rooting for him,” she says.

“The Celebrity Apprentice” airs Sundays at 9 p.m. on NBC.