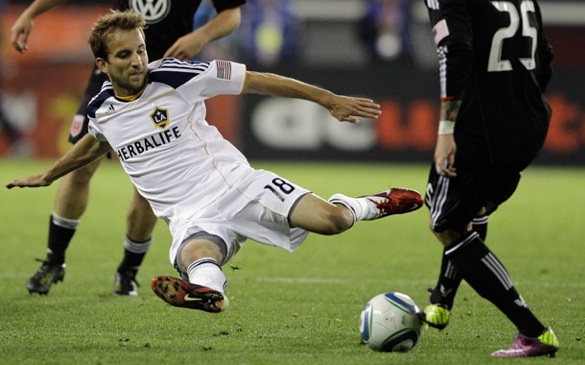 The Galaxy’s Mike Magee made his first goal of the season.
(Credit: lagalaxy.com)

Officiating in any professional sport is difficult. Make no mistake about that. But when a referee makes an idiotic call, things change – outcomes change. And that is what happened to the Los Angeles Galaxy Saturday night in Washington, D.C. “It was a hard-fought game,” head coach Bruce Arena says. “Obviously, it was a game where we felt like we should have walked away with the three points.” Leading 1-0 in stoppage time, central official Abbey Okulaja made an obvious mistake. Okulaja called a foul inside the box as DC United forward Charlie Davies faked a dive after Galaxy defender Omar Gonzalez gently hand-touched him. As a result, Davies converted on a penalty kick that knotted the score.

“I didn’t think it was a penalty, but that’s the job of the referee,” Arena adds. “We’ll look at it on tape, and we’ll see.”

Davis’ score became his fourth of the season, which is a league best. But he did not deserve this one. He knows it but probably will not admit it.

“I saw an opportunity to get the ball and go against the defense,” Davis says of being awarded the penalty kick. “I saw Omar Gonzalez, and I was one-on-one with him. I thought, 'this is my bread and butter; I have to go at him.' I did a step over and was able to get by him, but he put his hands on me and I was able to get a penalty.”

Mike Magee, who began playing the match as a left outside midfielder, recorded his first goal of the season. Off a crossed ball from a David Beckham corner kick, Magee found the ball with his head, eventually placing it inside the net for an early lead in the 12th minute.

“Any time you get on the road it’s nice to get an early goal, so that helped carry us for a while,” Magee states.

Now, the Galaxy try to recuperate from what was supposed to be a victory. They visit Toronto FC Wednesday, April 13, before traveling to Chicago for a game against the Fire Saturday, April 16.