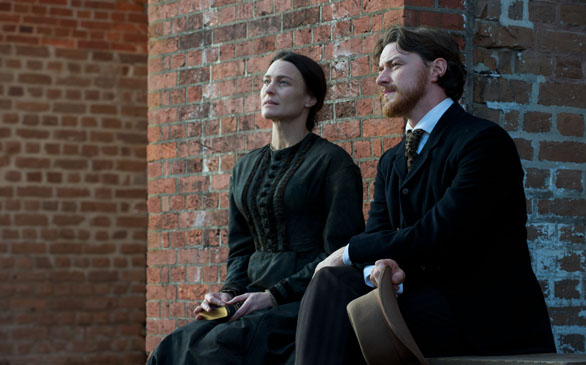 When we aren’t forced to memorize dates and facts, history can actually be kind of fun. It is in real life that the impossible happens. Ask any terminally ill patient whose cancer mysteriously recedes or the captain of a sports team who leads his team members to victory despite a losing record. These are the stories that make some of the best movies.

And let me tell you, by the end of The Conspirator, I was seriously reconsidering my day job. The film, the latest from director Robert Redford, is set in 1865. If you know your history, that’s the year John Wilkes Booth shot President Abraham Lincoln while he was at the theater with his wife. The actual event that took place on the balcony is not what we’re concerned with, however. The aftermath of Lincoln’s death, which coincided with the Union’s triumph in the Civil War, is when we set our scene.

Lincoln is dead, and the North wants revenge. Mary Surratt (Robin Wright) owns a boarding house, and her son John (Johnny Simmons) allowed his pal Booth to use it as the epicenter for planning the assassination. Booth was shot dead when he was found, but he couldn’t have acted alone. Mary is brought to trial along with seven others for the conspiracy. Maintaining her innocence, Mary is defended by rookie lawyer Frederick Aiken (James McAvoy).

Aiken has just returned from leading Union troops in the war and should be enjoying the company of his partying friend (Justin Long) and the girl who has been waiting for him to come home (Alexis Bledel). At first taken by his prejudice –Surrat is a dreaded Southerner after all – Aiken is unwilling to harbor the possibility that she is innocent. But as he pieces together her story through the testimony of her daughter (Evan Rachel Wood) and the lies of the prosecution’s witnesses, Aiken’s disgust with his client turns to outrage for the injustice of the court system that refuses to give her a fair trial.

The ending is no surprise (You can look it up in an encyclopedia.), but the film is quite a delight. The all-star cast also includes Kevin Kline and Tom Wilkinson, who deliver equally impressive performances. McAvoy is the star of this film, though, delivering the exhaustively tricky lines with an impeccable accent despite his native Scottish tongue. This film is not making any history, but it sure got me curious.