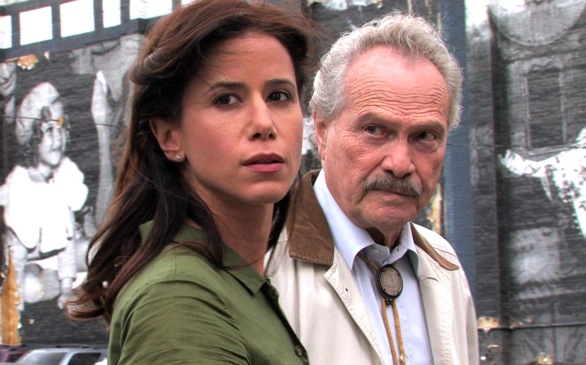 Hollywood is the land where dreams go to find fruition. It’s part of the myth of Los Angeles. If some rube in Shawnee, Okla. wants to make it as a star, he goes to Hollywood and becomes Brad Pitt. It has been that way since the studios first took root in Los Angeles and started producing one-reelers. The boulevard of broken dreams has always been Hollywood Boulevard, and Vine has given up its claim as its intersection to be replaced by Highland. But in spite of its iconic status as the epicenter of Hollywood, we’ve rarely seen it star in any movies.

Footprints seeks to correct that flaw of omission. A small, poignantly-told picture of considerable depth and charm, Footprints casts the Hollywood and Highland intersection in its leading role, and the characters and vagrants and hucksters become its supporting cast. Told in a magical style, Footprints (written and directed by Steven Peros, a longtime resident of the area) tells the story of Our Gal (Sybil Temtchine), who has the unfortunate luck to find herself laying across the hands and feet of Gene Tierney at Grauman’s Chinese Theatre with no memory of who she is or how she got there.

The movie becomes a search to find out the truth about her: Who is she? How did she get there? You never can be certain if Our Gal is wide-awake in a dream or sleepwalking through reality. The trip rarely slows down long enough for you to consider, as she runs across the likes of costumed superhero performers, a pair of tour guides doing a modern-day rendition of Abbott & Costello, a scientology auditor with perfect teeth and a silver tongue and a never quite explained stranger who seems to be following her, or maybe not.

The strength of Footprints is in these characters. The outlandish, the unusual and the absurd, Hollywood has its share of them, and Footprints gives them center stage. The presence of screen legend Pippa Scott as Genevieve and H.M. Wynant as Victor gives the film anchor in a sea of surrealism. At the end, you may not be any clearer on what just happened, but you’ll be glad you made the trip to Hollywood & Highland.