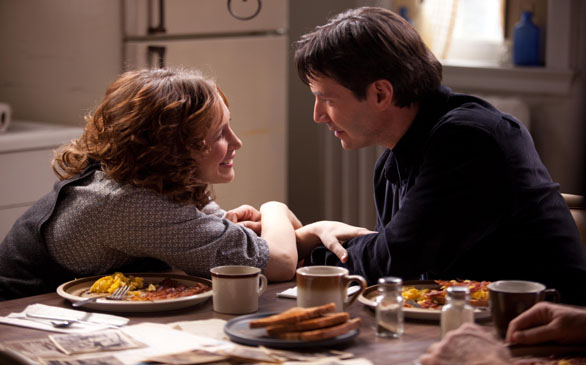 Comedian Jeff Ross once scornfully joked that a tollbooth attendant’s life was meaningless because, on any given day, that attendant’s job could easily be replaced by a bucket. Such is title character’s hellish reality in the lackluster Henry’s Crime.

On top of living his meaningless life, Henry (played by the vapid Keanu Reeves) has an overbearing wife and a group of friends who let him take the fall for their recent bank heist. Instead of being angry – or really displaying any emotion at all – Henry sees his 18 months in prison as a way out. While cleansing his palette of his former existence, Henry meets Max (James Caan). Max is a comfortable lifer who prefers prison to the outside world and convinces Henry that if he’s done the time he might as well have done the crime. This poetic justice is all the push Henry needs as he decides to rob the bank he’s already served jail time for not robbing in the first place.

Not dissuaded from seeing the film quite yet? Well then, what if I told you that to rob the bank Henry has to get Max out of prison, join the cast of a local play and fall in love with the lead actress all while hoping no one notices the armoire sized hole he’s punched through his dressing room wall? Encore!

The typical twists and turns of a heist film are all on display, but none that surprise, shock or even impress. Like all recent films of the genre, most notably 2008’s The Bank Job, Henry’s Crime is at best derivative. There’s really nothing unique about the story and nothing endearing about the characters, save for the charming and venerable Caan who steals every scene he’s in – and most scenes he’s not. Caan serves as a breath of fresh air in an otherwise dull film, and even at his advanced age, his character evolves more than anyone. Vera Farmiga, who dazzled as George Clooney’s sexy equal in Up in the Air, overacts as the stereotypical wet blanket girlfriend who holds Henry, the heist and eventually the entire film back. Keanu is simply Keanu, showing bits of brilliance between his blank stares.

Like the life of a tollbooth attendant, the film lacks meaning and ambition. Its slow and plodding pace doesn’t help, but for what it’s worth Henry’s Crime isn’t terrible, it’s simply forgettable.