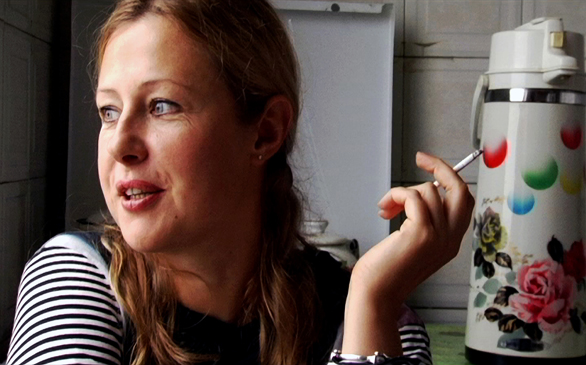 Olga smoking in her kitchen in Moscow – from My Perestroika.
(Credit: Courtesy of Red Square Productions)

My Perestroika is a documentary film by Robin Hessman. The film follows the lives of five different Russians, the last of a generation to grow up behind the Iron Curtain. They are all very ordinary, every-day kind of people, but they happened to come of age during one of the biggest cultural shifts in Russian history.

In many ways, this film is about the power of propaganda, and how Russia’s ideology kept people completely sheltered from the outside world. In their youth, some of these young Russians knew nothing of the ways of the west, especially in regards to the United States. For most of their lives, they knew only of a perfect Russia, but it was a Russia that was perfect only because that is what they were being told. History has made it pretty clear that the old country was anything but perfect. Hessman’s film illustrates just how deep the illusion went and asks if the present state of Russia may just be another illusion. Further, it asks if the present day is any better than the past.

One of this film’s greatest assets is its complete lack of authoritative narration, no politicians or historians telling you what to think, just these ordinary citizens relating their lives. A lack of talking heads in a contemporary documentary is a breath of fresh air. This story is of the people and by the people. If you want the history, then I suggest going to the library.

My Perestroika truly asks you to make up your own mind as to whether or not life is better or worse for these individuals. While focusing on several people, the filmmakers are able to address a multitude of topics, including commerce, politics, ethnicity and even punk rock, which seems to rear its aggressive head wherever there is political turmoil. Life, such as it is in any country, seems to work handsomely for some, while others only scrape along.

Like similar documentaries, there is an astounding amount of home movies, some going back nearly 40 years, which help paint a portrait of youth in the USSR. These are often contrasted with footage from the present day, as well as the old propaganda films of a bygone era.