After the Quake in Japan: Occidental Students Return Home 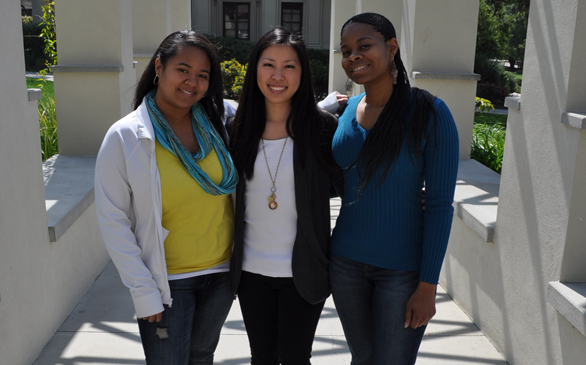 Three Occidental students who were on exchange in Japan during the earthquake.
(Credit: Emma Ceddia)

When Dayna Chikamoto, Ariana Frazier and Kiana Dobson felt the first rumblings of an earthquake, they had no idea it would send them home. They had only been in Kawagoe, Japan for two weeks when the Occidental College juniors were forced to cut their study abroad program short.

“We were in our Japanese Society class going over the syllabus, and we were just taking a 10-minute break in the hall when it hit,” says Frazier. “It started off like a normal earthquake, and I’m originally from California so I knew what to do, I stood in a doorway … but everyone was saying they had never felt anything so strong before.”

The students were evacuated from the building and waited outside watching news feed on their laptops. Kawagoe is 30 minutes by train from central Tokyo and far enough inland that the students did not witness any severe damage. However, the city’s trains were shut down, and those who could not walk or bike back to their homestays were told to prepare to sleep at the university.

“Eventually they found a school bus to drive us home, and it took hours to get through the traffic for a trip that was normally 15 minutes,” says Chikamoto.

All three girls made it home to their host families, who had waited up to make sure they were OK.

Tokyo International University, where the program was based, cancelled school for that week. Chikamoto’s parents immediately bought her a plane ticket home.

“They told me, ‘In the event that something does happen, we’d rather you be safe and you’d have to miss out on [part of your classes], because you could get radiation poisoning.’ There were a lot of ‘ifs.’ In the end, safety does come first, and I realized I had to go,” she says.

Believing that classes would resume the following week, Chikamoto and Frazier traveled to the house of a new friend in the program, to stay with her relatives. They understood the magnitude of the quake and the tsunami from watching Japanese news.

“They started showing the citizens filming, so we were seeing people’s personal reactions as their houses were being destroyed, it was really sad. People were crying, and kids were asking their parents what they’re going to do,” says Frazier.

The two were notified that the study abroad program was cancelled via an e-mail from the program coordinator, forwarded to Frazier’s cell phone from her mother.

“I was in shock for a second, I had to re-read it multiple times … When my mom forwarded me my flight information, then I realized it was real,” she says.

Dobson’s host family threw an impromptu farewell party for her, inviting neighbors who had already bonded with the student in the short amount of time she was there. Chikamoto and Frazier had to say goodbye to their host families over the telephone.

“I was crying at the airport. There was this sad elevator music playing, and I was just like ‘Oh my god, I cannot believe this is happening,’” says Chikamoto.

Upon return to America, each student went home and was given the choice to withdraw for the semester or return to Occidental to attempt to make up the credits. They have decided to return for the remainder of the semester in order to graduate on time.

“I’m extremely disappointed,” says Frazier, “But I’m grateful that I’m safe and that the people I know in Japan were far away from the tsunami.”

They will take Japanese language classes, and an independent study in order to salvage the semester’s credits and qualify as part-time students. Though each is hopeful to return to Japan some day, they said, they will not be able to go back during their undergraduate career.

“I still haven’t totally processed the fact that I’m back [in the United States], and I’m not going to be able to go back to Japan anytime soon,” says Frazier, who hopes to participate in the Japan Exchange and Teaching program once the country is stable enough for her to return.