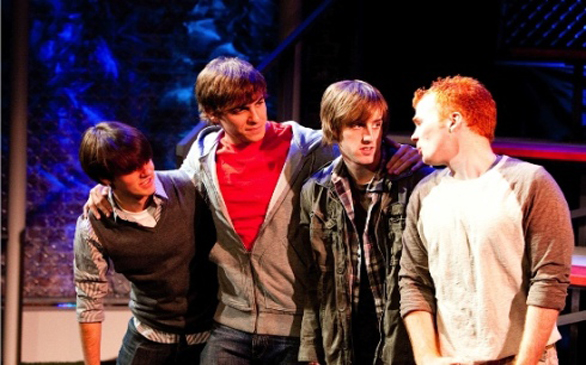 Friends unite after freshmen year at college in “Glory Days.”

Late at night, on a high school football field in Anywhere USA, four friends reunite to reminisce about the past, reveal a couple of secrets and get revenge on some bullies in Nick Blaemire and James Gardiner’s quaint musical, “Glory Days.”

Having just completed their first year of college, Andy, Jack and Skip find themselves back on the bleachers of their alma mater at the request of Will (the earnest Derek Klena), the group’s self-proclaimed glue who has managed to bring/keep them together. Andy (Matthew Koehler) is Will’s hot-tempered yet eager roommate. Skip (Alex Robert Holmes), the shaggy-haired indie kid, has become a political junkie. And Jack (Ian Littleworth), the sweater-vested prepster, has had quite an unforgettable freshmen year. Together, the four gather at midnight to plan a prank on the school’s football team.

Clearly not big enough for Broadway, but lean enough to cover all the bases within one intermission-free act, this Calvin Remsberg-directed tuner succeeds in showcasing each young man’s vocal talents, particularly those of Klena, who has Wannabe Heartthrob written all over him (“American Idol” fans, you may remember him from last season’s Hollywood Week.). And it’s Littleworth who shines and steals the spotlight for his poignant solo, “Open Road,” in which Jack shares with his brethren what he did during his semester break (Someone get these guys an audition with Ryan Murphy – stat.).

While two or three of the 17 songs sound as if they might have been cribbed from the deleted scenes of any given High School Musical (not that that’s a horrible thing), the majority of the Blaemire-composed numbers form a solid, harmony-filled, contemporary and showtuney soundtrack that will keep audience members entertained throughout the 90-minute production. Most notable are Skip’s solo, “Generation Apathy,” an anthem that would make any “Rent” fanatic sit up and cheer, and the uplifting “My Next Story,” Will’s post-epiphany closer.

Although the set never changes throughout the entire duration (a rarity with musicals), “Glory Days” presents an Easter egg-filled stage economically designed by Pantages Theatre restorer Andrew Hammer. Here, a strip of Astroturf acts as the football field, and the actors cleverly employ a row of bleachers at peak moments in the story. However, it’s the small details that pop up every now and then – a tossed soda can here, a few weeds sprouting up there – adding layers to the scene while the boys remove their own, expose truths they quickly learn to accept (or reject) and realize that it’s OK to let go of certain things … because the only constant in life is change.