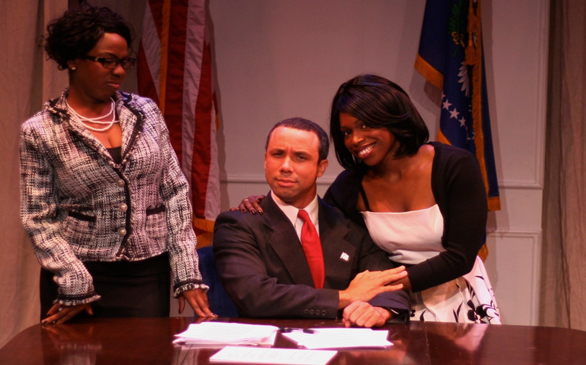 Politics and political officials are automatically targets for criticism and parody. It was never so clear that comedy could be rampantly found in Washington than during the 2008 election when the Sarah Palin jokes didn’t stop with the endless “Saturday Night Live” skits and attacks by journalists around the globe. To be honest, she was an easy target who – because of her gender, her looks and her uncanny speech – soon became a caricature Palin herself mimicked.

In the latest spoof that takes on many of our White House favorites, “Oh, Momma! & Obama” is a two-act musical written by Nicholas Zill, Derek Jeremiah Reid and Kenneth McLeod. The play centers around … you guessed it, Obama and his momma-in-law. The fictional circumstance is that Michelle Obama’s mother, Marian, takes up residence in the White House as a kind of nanny for Sasha and Malia as well as to drive the President crazy by framing him and making Michelle believe he has returned to the unhealthy habit of smoking. She also is responsible for stealing the codes to nuclear weaponry, which forces Obama to do every married man’s dream: lock up his mother-in-law at Guantánamo Bay.

Also making brief appearances are Sarah Palin, Bill O’Reilly, Joe Biden, Bill Clinton, George W. Bush, General Petraeus, Glenn Beck and Al Gore. The beauty about this small production is that the talent is fresh, and comedy is neutral to both parties. No character, Republican or Democrat, is safe to the taunting, but accurate, depiction in “Oh, Momma! & Obama.”

Obviously Marian’s character is purely fictional, but the way in which actress LaKendra Tookes delivers her makes us wish that Obama was plagued with so much comedic woe. She is the shining star of the performance, the one we want on the stage for the entirety of the performance.

The rest of the cast is noteworthy as well. Constance Reese, who plays Michelle Obama, has an amazing voice, and she has one number that will give you the chills. Natashcha Corrigan as Sarah Palin isn’t Tina Fey, but she does a damn good impersonation as well. For a production of this scale, “Oh, Momma! & Obama” has a lot of heart.