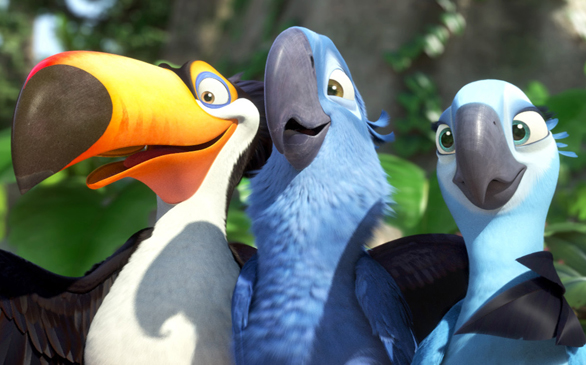 In the dazzling new 3-D animated film, Rio, Blu (voiced by Jesse Eisenberg) is a neurotic domesticated macaw – think Woody Allen with wings – living in small-town Minnesota. But when he’s brought back to his homeland of Rio de Janeiro to mate with the last of his kind, a beautiful bird named Jewel (Anne Hathaway), he ends up with a posse of new friends – including the wise toucan Rafael (George Lopez), bulldog Luiz (Tracy Morgan), cardinal Pedro (will.i.am) and Nico, a canary (Jamie Foxx) – on an unwantedly life-changing adventure, one that allows him to finally spread his wings.

But Blu wasn’t the only one soaring to new heights. The film features music by Sérgio Mendes, giving Hathaway the opportunity to sing with the music legend, as well as a Black Eyed Pea and Foxx, all multiple Grammy winners.

“Singing is always something I’ve loved to do, but I never thought about doing it professionally,” Hathaway says shyly. “I was always more drawn to acting, but I’m doing things [in this movie] I never thought I would do.”

One of Rio’s great strengths is the chemistry between Eisenberg and Hathaway’s characters. However, the actress admits, they never actually got to work together during their recording sessions.

“I haven’t seen Jesse, except socially, throughout this whole process,” she says. “Interestingly, for those avid IMDb surfers, Jesse and I played brother and sister in a Fox series called ‘Get Real’ in 1999.”

Asked if she was drawn the film because of her experience with previous voiceover work on “The Simpsons” and “Family Guy,” Hathaway laughs.

“You’re giving me way too much credit! I love employment, and it’s never guaranteed. As much as I love animated work, I just love working and I’ve loved the people who have asked me to do it. It’s been an honor. I just keep getting these opportunities that I can’t say no to. No one could.”