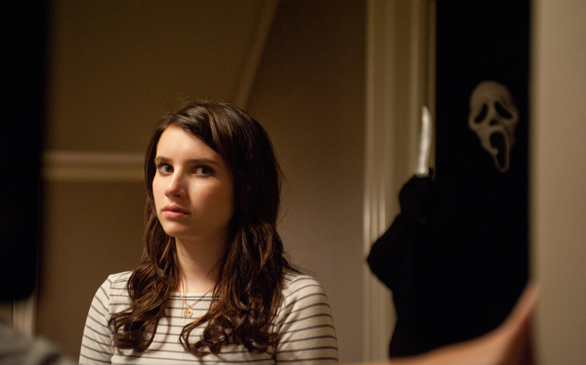 On the 15-year anniversary of the original, horror film god Wes Craven is making his fans giddy with excitement for the next tantalizingly scary and equally humorous installment. Scre4m is not pretending to come back where the story left off; there’s a new generation of victims and, like always, a new killer. Emma Roberts is one such newbie who is scared of something other than the infamous Ghostface.

“All of us were scared because the scripts were watermarked,” Roberts says. “So if you lost it, you knew who lost it. Mine said ‘Emma Roberts’ down the script. I’d be so embarrassed if mine got lost and turned up on the Internet with my name on it. There were times where I almost lost it.”

But the script and the ending have been kept an airtight secret because Craven and crew want to give audiences the most exhilarating Scream ride yet. Thankfully, Roberts didn’t lose her script. She stars as Jill, the cousin of scary movie icon Sidney Prescott (Neve Campbell) who has become a local celebrity in Woodsboro. Sidney has returned to the town for the anniversary of the murders, which her publicist uses as a twisted PR tie-in to promote her new book. Like Sidney’s return to her hometown, original cast members Courteney Cox and David Arquette are also back as Gale Weathers and Sheriff Dewey.

“Coming back the first day, it felt very natural,” says Cox. “First of all, we’ve had 10 more years of experience of acting. I was that much more comfortable. We are like a family, so we just want to get back into it and be better than we were last time. Wes really was our mentor.”

The entire cast gushes about Craven, who has a history with creating monumentally popular horror franchises including A Nightmare on Elm Street (1984) and The Last House on the Left (1972). In this film, the director and screenwriter Kevin Williamson step up their game to match the generational shifts that have taken place since Scream 3 (2000). Technology is integral; the killer is even using it. And this movie finds an eager balance between its scary moments and its smart and funny self-reflexivity. To create such a complex film that conquers the horror genre and dabbles in others, Craven must be a strict and focused presence on set.

“He watches Korean horror films in the middle of filming,” reveals Arquette. “As much of a master as he is, he’s still a student. That’s what makes him so incredible. It’s been a great experience, growing with each other. It brings a reality, a humanness to these movies. There are films within films, but then there’s real life. They are all intermingled.”

As serious as the actors and filmmakers are about their craft, they were able to let loose during the three months they filmed in Michigan. Roberts says that pulling pranks on each other was the norm. Anthony Anderson, who plays a cop in the movie, was the victim of one such prank.

“I was upstairs, and I was going through the closet,” says the funnyman. “No one was supposed to be in there. I opened up the door, and [someone] jumped out in the mask and with a knife and scared me shitless to the point where I soiled myself.”

That mask has been scaring audiences for a decade and a half, and in Scre4m, Ghostface gets a sufficient amount of screen time. His ability to frighten never seems to wane, but what few people realize is that the mask was based on Edvard Munch’s painting from 1893 entitled The Scream. The similarity isn’t just in the stretched face. Both works have a certain quality to them that Hayden Panettiere expresses precisely.

“A lot of [horror masks] nowadays are very gruesome with blood and scabs and this and that,” says the actress. “But there is something so scary about [the iconic Scream mask]. It’s just so simple. Even the painting that it’s based on, it’s just eerie. It just gets you in the simplistic, unexaggerated way that it’s done.”