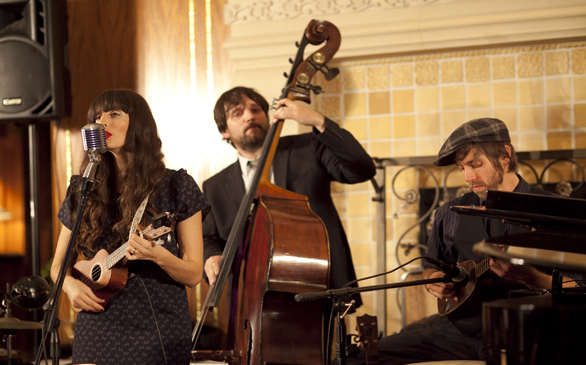 Sometimes there’s nothing better than spending the evening in a big, comfy armchair or sprawled out on a vintage sofa, listening to mellifluous crooners or swingin’ jazz bands, surrounded by folks just like you looking for a good time.

Catch Me at Casa del Mar

If you didn’t catch the Leftover Cuties when they used to play on Abbot Kinney Boulevard for First Fridays or at Angel’s Piano Bar & Supper Club in Santa Monica, then you must get over to Casa del Mar (1910 Ocean Way, Santa Monica) on Friday nights from 7 p.m. to 10:30 p.m. Their sound is described as “Billie Holiday playing ukulele under a palm-thatched hut in 1930s Waikiki.” Intrigued?

Singer-songwriter Shirli McAllen is as pretty as an antique doll, while her band of cool cats are cute in an O Brother, Where Art Thou way. Since their strumming-in-store days, Hollywood has come knocking: their EP title track “Game Called Life” was placed as the theme song for Showtime’s original series “The Big C” starring Laura Linney, and their song “Through It All” was used on FX’s “Justified” on March 16.

The lively quintet is unusually amped these days as they rev up to release their debut album, Places To Go, on May 31. McAllen’s rendition of “Poker Face” beats Gaga’s any day!

And Friday isn’t the only night for soothing sounds. Thursdays is Stuart Elster Jazz Piano and on Saturdays, Erin Boehme serenades with covers of classics from legends like Aretha Franklin and Ray Charles. “Soul meets American songbook,” she likes to say.

While you’re taking in the classic sound of the Cuties, there’s much to admire at the bar, in addition to the good-looking people. The cocktails are scrumptious, especially the red passion margarita, and they serve finger-licking apps like grilled cheese with tomato soup and can’t-eat-just-one chips and guacamole. But the real treat comes when you step upstairs to Catch. Though the bulk of your night may be spent lounging in the main lobby, you’ll want to treat yourself to a meal at Catch.

If you’re there between 5 p.m. and 7 p.m. on any given day, one option is to go for the Sample Catch, where you try out a selection of Chef Jason Bowlin’s new dishes for $6 each. Originally from Oklahoma, Bowlin has worked closely with Wolfgang Puck and at Jiraffe in Santa Monica. His creations are something to write home about. From his specialty of Bouillabaisse, Mussels, Clams, Shrimp, Rock Cod with Grilled Bread and Garlic Aioli to the richly flavored Pan Roasted John Dory with Parsnip Puree and Sea Beans, every item on the menu is a keeper. While the fish is spectacular, you can’t go wrong with apps like Pumpkin Squash Soup and FB & J (Foie Gras Terrine and Huckleberry Jam on Brioche). For dessert, you’ll have to head back to the lobby for Leftover Cuties because there will be none when you order churros and chocolate.

Angel’s rarely has a cover and is overflowing with jazz, soul and funk singers and swingers. Tuesdays from 7 p.m. to 11:30 p.m. the Richard Glaser Band serves up original, straight-ahead jazz. Then on Wednesdays, the Mad Alsacians turn the spot into a hot club in France with 1930s to ’60s French music, fun gypsy sounds and a few Latin selections. Angel’s even offers French food specials and half-price on select bottles of wine on this night. Check their calendar for more one-off performances.

Perched atop Hotel Shangri-La is Suite 700, a rooftop bar and lounge. Stop by from 6 p.m. to midnight for Speakeasy Sundays hosted by mixologist Chris Corbin with silver screen stars Laurel & Hardy, Charlie Chaplin and Harold Lloyd flickering in the background, complemented by bootleg blues and classic cocktails of the decade. I’ll have a Rum Rickey, please!