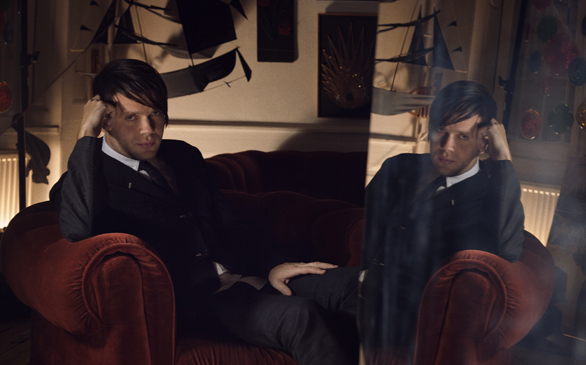 Waiting for me on the patio of Petit Ermitage Hotel, dressed in black, eminent Danish producer and DJ, Anders Trentemøller, smiles as I walk in. Pale and glowing in the sunlight, (kind of vampirelike, if you ask me) the DJ has that sort of aura around him that would make just about anyone question who he is. Surprisingly though, as his new single “Shades of Dark” (off of his sophomore release, Into the Great Wide Yonder) and much-anticipated Coachella appearance have fans jumping up and down with excitement, Trentemøller himself was a mellow character not too different from the average Joe. Yet, this DJ has a major crush on music and is able to have you fist pumping to his beats in no time.

Trentemøller started out as a club DJ in his early career. Even then, he knew how to get a party rolling. He would bring a MIDI keyboard with him and add melodies to what he was mixing. In 2006, he released his debut album, The Last Resort, which combined dark electronica and pop melodies with guest vocalists.

The result? People went head over heels for him. Ever since his debut, Trentemøller has been performing around the world at clubs and major festivals such as the Roskilde Festival in Denmark, which he played in front of more than 50,000 people. Lucky us, because we are graced with his presence during a coast-to-coast tour that brings him to Coachella.

As Trentemøller puts it, DJ-ing and playing with a band in front of a humongous audience is very different.

“Me playing as a DJ is more like throwing a party, you know?” he says. “Playing with my band like at Coachella is much more different, because maybe you can jam a little bit more and do small work, like experimenting. We are seven people on the stage … it’s a total different energy and audience from when playing in a club. At a club, the people are there to party, but playing with my band, the audience is much more dedicated to maybe a little bit to music than the party.”

Perhaps this is the reason why Trentemøller says there is a lot more improvisation when playing with a band: the dedication to music.

“It is very important for me that the tracks we are playing from my previous two albums … that we do not play the same versions live,” he says. “Playing with the band gives us new possibilities to [experiment].”

Interestingly enough, Trentemøller has gathered a rather eccentric group of members for his band. A guitarist, a drummer who is a famous designer in disguise (Henrik Vibskov) and lastly, someone who conducts air with an old Russian instrument (This is something you may want to check out yourself as it is kind of hard to explain in words … it’s very scientific.).

“She’s like a diva when she plays it [the Russian instrument],” he laughs.

What is so special about Trentemøller is that, aside from the music, he spends a notable amount of time on the visuals as well. Because as he states, his music is mostly instrumental and he rather not sing – something about how he isn’t good at it. Trentemøller loves incorporating visuals to further stimulate the audience. At Coachella, we are sure to expect a brain-stimulating performance from him.

The DJ’s work does not end with music. He also has his own fashion line. It’s black and simple, just like his personal preference. Oh as a side note, he mentions a funny incident. When Kanye West’s manager came to talk to his manager to ask if West could rap on stage with him, Trentemøller, fresh off the boat, forgot whom West was, and rejected him.

Hope he doesn’t forget next time.