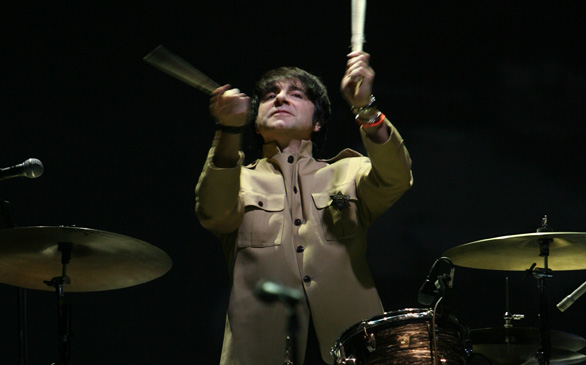 For a drummer, impersonating Ringo Starr as a living ain’t that shabby. You might not have to deal with the overwhelming fame, but you can still find love from audiences across the country – and all you need is love.

Ralph Castelli, the Ringo Starr of “Rain” on stage at the Pantages, has been in the show since 1986. Castelli’s love for the British stars didn’t start there; he was a member of Beatlemania on Broadway and even remembers the Beatles’ heyday.

“When the Beatles were on ‘The Ed Sullivan Show,’ I instantly knew what I wanted to do. I started portraying [Ringo’s] musical aspect and his mannerisms,” says Castelli. “I’m a Beatles fan, and I was one of the lucky ones who had a drumset in my house and brothers who played Beatles in the ’60s.”

“The Beatles are world renown. It’s the biggest career in such a short time. So many hits, and they were loved everywhere in the world,” he says.

Castelli has made a career of playing Ringo and loves his time in the constantly changing “Rain.”

“I love it all. The show moves pretty rapidly. There are six different costumes in the show,” says Castelli. “The show is a rock concert with a theatrical element to supplement the music. There’s very little dialogue, but what there is, is with the audience.”

Castelli has traveled all over with “Rain” and is back in Los Angeles for the second time to perform at the Pantages.

“I’m looking forward to [being back in] L.A. There’s nothing like the West Coast beaches,” he says.