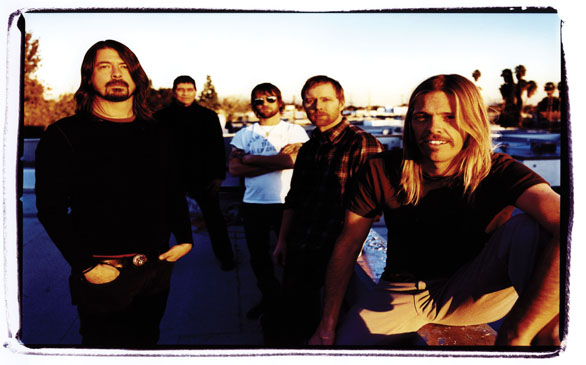 A sampling of what’ll be available: Deerhoof’s Friend Opportunity album on green vinyl, Busdriver’s 7-inch single “ATM” on baby blue vinyl, a Built to Spill picture disc, a set of three 7-inch singles from R.E.M. with new material on the A-sides and unreleased cuts on the B-sides, the Glassjaw album Worship and Tribute on vinyl for the first time ever, colored vinyl re-releases of classic rock albums from Tom Petty, a covers album from the Deftones, a Regina Spektor 7-inch single on powder blue vinyl and a My Chemical Romance picture disc. Fans of late rock singer Ronnie James Dio will need to scramble to get a picture disc version of the 2002 Dio release Killing the Dragon – only 2500 copies will be available.

About 700 stores nationwide and in Canada will be participating in Record Store Day 2011 including over a dozen outlets in the L.A. area. Some stores will host live performances, and the Foo Fighters will play a special Record Store Day set at Fingerprints in Long Beach. Check recordstoreday.com for a list of stores, special releases and special events.

Drummer extraordinaire Josh Freese has just released an EP called My New Friends, and just as he did with his 2009 release, Since 1972, he’s come up with a wide variety of add-on offers for purchasers of his new music. The “Thank You Phone Call” adds a personal call from Freese to the CD purchase and costs $50, while the “Box Set” comes with all three of Freese’s releases, the phone call, a set of signed drumsticks and for some reason a copy of Freese’s 5th grade report card. Pop for $350 and you can have lunch with Freese at P.F. Chang’s in Long Beach.

But here’s where things start to get crazy: For $7500 you can spend an evening partying with Freese and Tommy Lee or head to the spa with Freese and Twiggy Ramirez of Marilyn Manson or fly to San Luis Obispo for lunch on Dexter Holland’s (the Offspring) private jet. And if you happen to have $75,000 lying around, that amount will make Freese a member of your band for a month. It would probably be worth it; Freese’s pedigree includes beating the skins for Nine Inch Nails, Weezer, Guns N’ Roses, Sting, Devo, the Vandals and many others. A complete list of packages and all the goodies they contain is at joshfreese.com.

The Take Action Tour featuring Bayside, Silverstein, the Swellers, Polar Bear Club and Texas in July rolls into the Hollywood House of Blues May 12, and as usual, the tour put together by Sub City is a charitable event. Proceeds from this year’s tour benefit Sex, Etc., a teen-focused program whose mission is to improve the sexual health of teens by providing education and other resources.

And also as usual there’s a CD compilation coming out to commemorate the tour with proceeds also going to Sex, Etc. Take Action Volume 10 is a two-CD set featuring cuts from Circa Survive, Chiodos, Versa Emerge, All Time Low, the Wonder Years, the Ready Set, Andrew Jackson Jihad, Fake Problems and many others. Lots of the songs are previously unreleased and exclusive to the compilation; Take Action Volume 10 drops on April 26 and will also be available at Hot Topic and at all tour stops.

RockHampton Records act Eastern Conference Champions are about to release their latest; Speak-ahh is set to drop on April 26. You may remember the band made some noise last year thanks to the inclusion of their song “A Million Miles an Hour” on the soundtrack to the film The Twilight Saga: Eclipse. Catch ECC at their special record-release party show at the Echo on April 22; after that they head out on tour with Neon Trees.