'Ellismania': Jason Ellis is a freight train wreck who has his shit together. 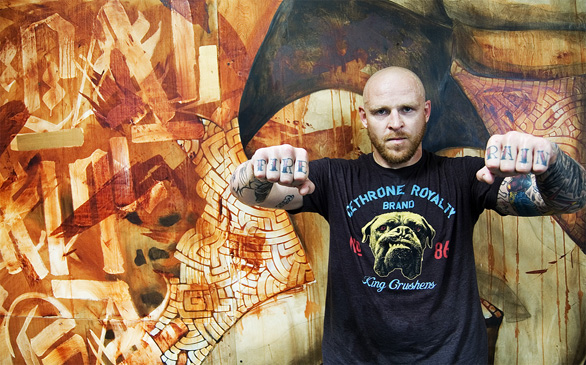 In “Ellismania,” Ellis prepares for and hosts Ellismania 6, a self-branded evening of “fighting at its dumbest,” peppered with hilarious twists of comedy for the amusement of friends and fans lucky enough to witness the absurdity.

Ellis recently gave Campus Circle the inside scoop on all the crazy antics behind the new show.

Jason Ellis: “Ellismania” is a camaraderie of the hardcore fans. Friends and people who listen to my show all meeting in a place where we beat the shit out of each other in the most hilarious ways that you could ever imagine.

Who’s part of the cast?

There’s your regulars, some of my fighter friends – Jason “Mayhem” Miller, Kit Cope – then there’s a lot of the fans that have become sort of famous. Scott Green who fights a lot … the new one from this “Ellismania,” Butter Balls, he’s made himself a legend in the Musical Chair twice and now he’s in every Musical Chair, [he] has a belt and he defends it. There’s Joanna Angel, Benji Madden, Riki Rachtman … anyone who’s willing to step in there and give it a go; we’ll give you a chance. I mean the only thing I won’t do is let somebody fight where I know they are going to get hurt. A bloody nose, I’m cool with that. Somebody lost a tooth – that’s about as far as it’s gone.

How did you go about selecting your cast?

I meet people, I talk to them on Twitter. I’ll talk to them and see what reasons they want to be involved. It’s very easy for me to read people; it only takes a couple seconds. I know what you’re into and what you’re about, and if you are into it for the right reasons, ’cause we’re not here to kick the shit out of each other in an angry way, we’re here to have a good time. It’s a therapeutic thing ... a lot of guys I’ll give a chance to fight so that it’s going to help him in his life. If he can get this done, win or lose, he’ll feel better about himself and about his life.

Tell us about yourself, who’s Jason Ellis?

Who am I? Shit … Uh, I’m a busy man. I’m a man with a lot of experiences and [who has] traveled a lot of roads, and I’ve done a lot of things the wrong way and I now know – not from reading a book but from experience – how to go about things the right way. I care about a lot of people. I’m an angry person. I’m a lot of people; there’s a lot of people inside me. Schizophrenic: That would be an easy word to do, let’s just do that. A freight train wreck that has his shit together.