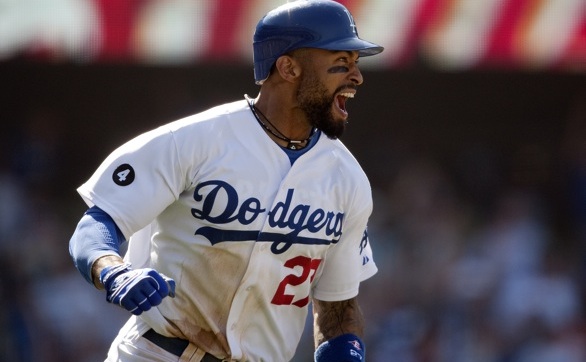 Matt Kemp reacts after hitting a two-run homer against the Cardinals.
(Credit: Gina Ferazzi/Los Angeles Times/MCT)
Matt Kemp is balling … on the diamond for the Los Angeles Dodgers.

“It’s one way to turn the page,” manager Don Mattingly states. “You talk about getting that rock rolling in a different direction. It's got to start somewhere, and that’s a pretty good start right there.”

The Dodgers (7-9) needed this victory after losing the first three games to the Cardinals in their four-game set at Dodger Stadium. And Kemp delivered in his final at-bat after Chris Carpenter’s pitching display of seven innings left no signs of offensive sparks for Los Angeles.

After Andrew Ethier connected for a lead-off double, Kemp stepped into the batter’s box. Cardinals manager Tony La Russa decided to pitch to him, and Kemp made La Russa pay with his third homer and 11th and 12th RBIs of the season.

“I was just trying to tie the game up. Do whatever it takes to help the team at least go into extra innings or help us win the game. I asked him to bunt and he said, 'Nah, drive him in.' And that's just what I did,” Kemp says.

Totaling 12 runs scored and eight stolen bases, Kemp now sports a batting average of 474. He has turned into a Dodgers leader in almost every category.

“As good as he’s been going, I can’t even think about letting him try to bunt,” Mattingly says of Kemp’s solid play. “It’s great because it’s a team thing. He was willing to get that guy over and let somebody drive in the run. But the way he’s going, you’ve got to let him swing the bat.”

The Dodgers host the Braves April 18-21.