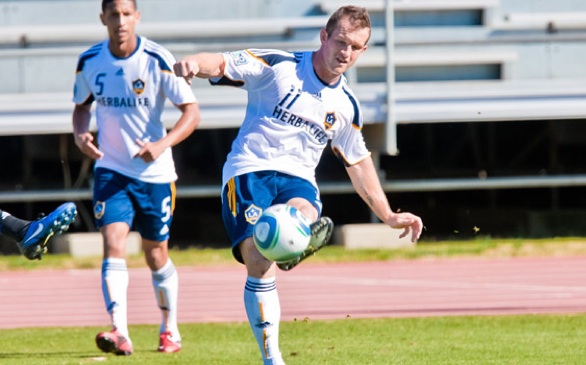 The Galaxy's Chad Barrett
(Credit: lagalaxy.com)
No David Beckham. No Landon Donovan. No problem. The Los Angeles Galaxy concluded a three-game road trip with a 2-1 victory over the Chicago Fire Sunday.

“It was a good win. I thought that they played very well for large portions of the game,” head coach Bruce Arena says. “Obviously, the game got a little hectic during the last 10 minutes of the match, but it’s good to walk out of here with three points.”

With the win, the Galaxy is now 2-1-2 with eight points, good enough for a momentary third place in the Western Conference. Chicago, on the other hand, is 1-1-1 with four points.

Due to accumulation of yellow cards, Beckham served a one game suspension. Meanwhile, Donovan is still recuperating from knee injury.

“We didn’t have a lot of guys eligible to play today,” Arena adds. “Guys stepped up today that haven’t been playing regularly like Paolo Cardozo, Miguel Lopez, Mike Stephens and Frankie Hejduk.”

Los Angeles took a 1-0 goal edge by the 42nd minute on a Chad Barrett score. Lopez registered the assist.

“The whole plan was to stay high because Miguel likes to float underneath. He got out wide, and I was able to get near the box. I didn’t think I could get near post, so I made sure I got in a spot where he could hit me,” Barrett says. “The ball was served in a real tight spot and I had a good first touch and I wanted to make sure I slotted it on the ground to the far post on goal.”

In the 72nd minute, defender Omar Gonzalez connected for his first goal of the season. Lopez gained his second assist of the match.

“It’s my third or fourth game back and to get a game-winning goal is great, especially getting it off a header,” Gonzalez says of the score. “It’s something I worked hard at during the offseason. It’s good to get the game winner because it’s been a long road trip and we’ve scooped up nine points in five games.”

The Galaxy return home to play the Portland Timbers Saturday, April 23, at the Home Depot Center. Kick off is at 8 p.m.