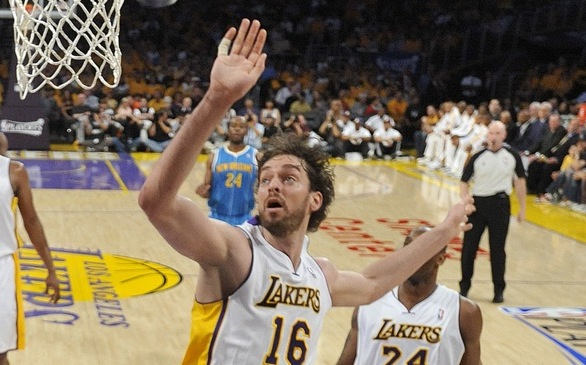 Pau Gasol needs to step it up for the Lakers.
(Credit: Michael Goulding/Orange County Register/MCT)
New Orleans came into Staples Center with no fear and ready to play. The Lakers did not, thus suffering a 109-100 defeat in Game 1 of the NBA playoffs’ first round Sunday afternoon.

“Our defense, I thought, was late. I think we were late on everything. They were the aggressors, and they stayed aggressive,” head coach Phil Jackson argues. “I think they respect the Hornets. I just don’t think they were keyed in on what they have to do.”

“A lot of people counted us out from the beginning. A lot of people probably still count us out. That’s cool,” Landry confesses. “A lot of people might think this game might have been lucky, but we play as a team. We play as a collective unit. We’re without David West, but we’ve still got dudes on this team that can step up.”

For the Lakers, an overpowering Kobe Bryant was not enough. Bryant compiled a game-high 34 points, five assists and four rebounds in 42 minutes of play. Ron Artest contributed a double-double of 16 points and 11 assists, while center Andrew Bynum added 13 points and nine rebounds.

Lamar Odom, one of the leading candidates for Sixth Man of the Year, recorded 10 points off the bench.

“To lose on our home court in the playoffs, probably against a team that people think we should handle easy, I think it’s good for us,” Odom recognizes.

Pau Gasol did not make his presence felt with just eight points, six rebounds and six assists. Bryant believes he will be ready for game two (April 20).