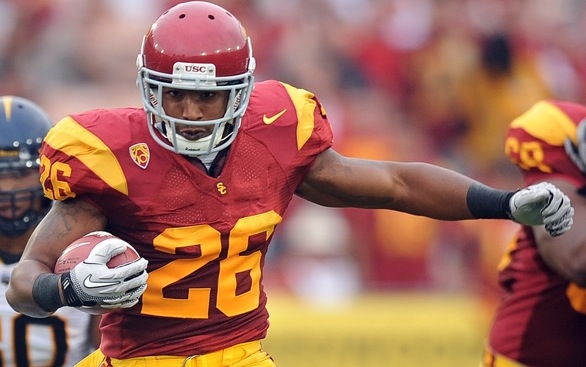 Tailback Marc Tyler is a star player.
(Credit: Wally Skalij/Los Angeles Times/MCT)
USC looks to gain control of the newly established Pac-12 Conference and once again establish their dominance in college football. The Trojans are back on the field training for the upcoming season waking up as early as 6 a.m. for meetings and practice. Although both offense and defense are determined to prove themselves, injuries might prevent them from doing so.

The Trojans currently have 20 players who are sidelined due to injury. Star players include tailback Marc Tyler, offensive tackle Matt Kalil and wide receiver Kyle Prater. One player in particular recently got some practice time coming off a hamstring injury: Sophomore wide receiver Robert Woods showed that although injured he can still be a great threat.

“He still isn’t 100 percent ... but it’s good to have him back,” says quarterback Matt Barkley. “He’s consistent, a good route runner [and] he seems to catch everything.”

Woods was 2010 Pac-10 Offensive Freshman of the Year and his 1,817 all-purpose yards is a USC freshman season record. Wearing No. 13 Woods was USC’s secret weapon that most teams in the Pac-10 weren’t ready for. Although No. 13 was good, No. 2 will be better as Woods will wear that number this upcoming season.

“Teams [now] know who I am, but my biggest thing is just get stronger, don’t go down on easy tackles [and] try to be a game-changing receiver,” he says.

It seems lack of defense and tackling caused the Trojans to lose close games, but upcoming stars like cornerback Patrick Hall are determined to change that.

“Players need to have chemistry on the field,” Hall says. “If we know our assignment and where our help is on the field, we can play faster and capitalize on defense.”

Focused on improving their 8-5 record from last year, head coach Lane Kiffin says it best: “We got a lot of work to do.”

The Trojans continue early morning practice, which ends with the annual Spring Game on April 23 at the Coliseum.