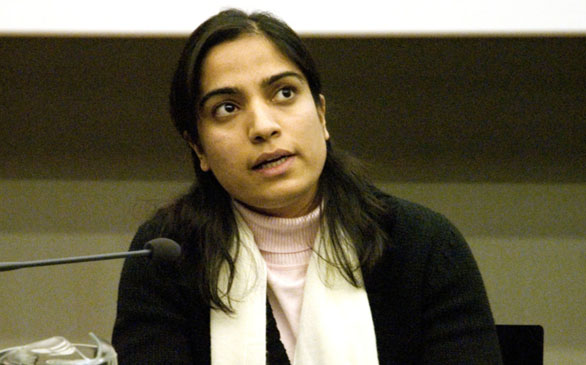 Afghan politician Malalai Joya spoke at four locations in Southern California last April 7 and 8 as part of her three-weeklong speaking tour. She lectured about prospects for ending the Afghan war and promoted the updated edition of her book, A Woman Among Warlords.

The U.S. government denied Joya’s visa request March 16, on the grounds that Joya “lived underground” and was “unemployed.” The campaign began immediately to pressure authorities to grant Joya’s visa request. Letters and online petitions began pouring into the U.S. Embassy from Congress members, activists, intellectuals, the ACLU and a massive online petition garnering over 3,000 signatures. A national call-in day was staged on March 23 to urge Secretary of State Hillary Clinton to grant Joya’s visa.

On March 24, Joya’s visa request was approved; however, she had missed her first several stops on the tour, including New York and Washington, D.C. Due to her absence, Joya spoke to the crowds via video broadcast.

“The audience reaction was very powerful,” she says. “Technology can cross borders without the need of a visa.”

Joya has witnessed diverse audiences during her tour, most notably two little girls who approached her during a book signing after one of her lectures. They looked at all the things on her table as they handed her a piece of paper to autograph. Out of the over 300 people who attended her lecture, these girls became embedded in her memory after the emotional moment the three of them shared.

“They are the future,” Joya says about young people with an interest in politics. “They have more energy.”

At the age of 27, Joya was the youngest female politician elected to the Afghan parliament in 2005. She was later dismissed for her public criticism of warlords and fundamentalism in Afghanistan. She has been the target of several assassination attempts, forcing her to live underground. She has also denounced the War on Terrorism and U.S. involvement in Afghanistan.

Joya describes her generation as a “war generation,” since innocent men, women and children are killed, injured or directly affected by the Taliban, warlords, and fighting from the war.

She also advocates women’s rights. She describes the situation of the woman in Afghanistan as “like hell.” Rape, domestic abuse and violence towards women are increasing rapidly.

“The reason is because there is no justice with misogynist warlords, especially with the Taliban,” she says.

Joya has traveled to the United States five times in the past several years, and this is the first time she has had a problem obtaining a visa. She says she was not surprised that she was denied this time because of her publicly denouncing the foreign politics of the U.S. government.

“My message to the justice loving people of the U.S. And around the world is just that even now it is not too late,” she says regarding the violence and oppression occurring in Afghanistan, Libya and other countries in the Middle East.