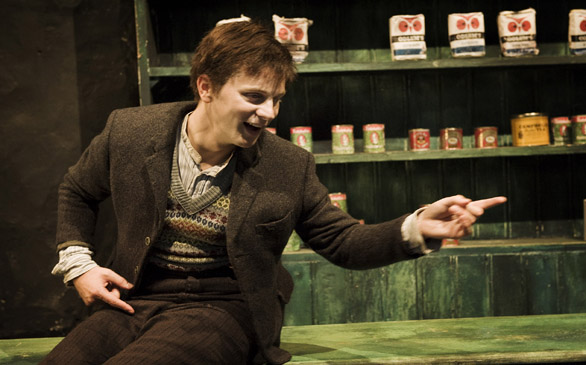 Tadhg Murphy in “The Cripple of Inishmaan”
(Credit: Ros Kavanagh)

“The Cripple of Inishmaan,” presented by Druid and Atlantic Theater Company, tells the story of a young crippled lad named Billy, endearingly portrayed by Tadhg Murphy, who lives with two older women, Kate and Eileen, who run a small grocery store. One day, the gossip of their small town Johnny Pateen Mike, wonderfully played by Dermot Crowley, stops by with three rumors (his gossip always comes in threes). The most important being that Hollywood has taken over Inishmaan to shoot a film. This not only excites Billy, but other youths around town, including the troublemaker, Slippy Helen played fearlessly by Clare Dunne and Bartley (Laurence Kinlan). They convince Bobby (Liam Carney) in their own ways to give them a boat ride to Inishmaan because they want to try and get a part in this American film being produced. Add the newsmonger’s alcoholic 90-year-old mother to the mix and you get one fiercely hysterical play.

The best part of this experience is the fully Irish cast. It was so great hearing real accents! Theirs is the longest touring Irish cast in decades, performing throughout the United States and Ireland, giving their final performance this summer on the island of Inis Meain (titled Inishmaan in the play) and part of the Aran Islands, where the play will be performed for the first time ever. Don’t miss it! This is the best theatre in Los Angeles right now.