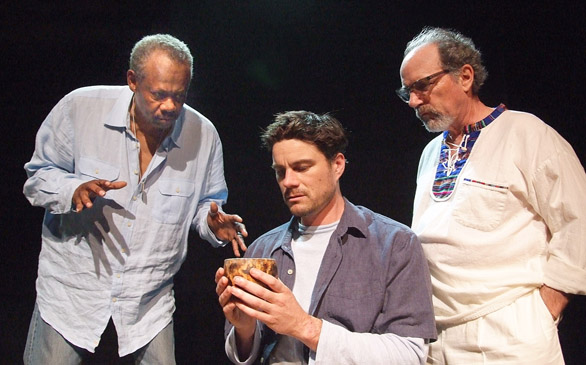 Playwright Murray Mednick is not one to pander to an audience. Having written for the professional stage for over 40 years, his body of work is decidedly avant-garde and unapologetically cerebral. For his latest work, “DaddyO Dies Well,” Mednick returns to the director’s chair.

It is the fifth installment in the ongoing “Gary Plays,” a project which first hit the stage in 2004. Taking many different approaches, from stream-of-conscious theater of the absurd to straight narrative, the plays have told the story of Gary, a middle-aged actor coping with the shooting death of his teenage son and the collapse of his marriages. The stories have introduced numerous characters who are often shot into tangential scenarios. Such vagaries have served to illuminate the inner world of a character trying to make sense of the senseless and find peace in a hostile world.

With “DaddyO Dies Well,” the scene shifts to an Ayahuasca tea-drinking ceremony. The tea brewed from a root grown in the Amazon is used in shamanistic rituals for insight into the Spirit World. Mednick finds rich ground to allow his characters mighty riffs of dialogue on subjects profound and profane. It is great fun to watch, even if the throughline of Gary’s story gets obscured in the process and flights of fancy seem a little bit just that, unnecessary. Yet when dealing with a master of the avante-garde such as Mednick, it is probably ill-advised to question his choices and say only that an evening at “DaddyO Dies Well” will require a tolerance for not “getting” everything.