El-P: Ex-Company Flow rapper El-P stakes out his own sp 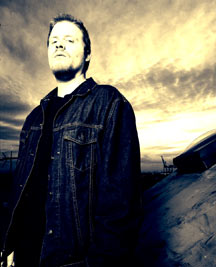 It’s a bit of an understatement for El-P to sum himself up like that. He’s all over the place. As head of his own hip-hop label, Definitive Jux, a sought-after producer, and an acclaimed solo artist (check Fantastic Damage), El Producto has put out more product in the past few months for people to keep track of. Even El-P is having trouble keeping it straight in his head.

Discussing recently released projects, El-P seems quizzical as he tries to discuss some of the titles.

"The One Big Trip DVD?" El-P asks, racking his brain for recollection. "I’m on that one? Huh, I think they contacted me when they were creating the film and I don’t know——I liked the idea it seemed like an interesting thing to do."

You can’t really blame El-P for losing track. Every release from his label has received accolades for their sleek production and quality musicianship. And when El-P’s not touring with his Def Jux crew or working with label mates, he’s doing outside projects with everyone from former Rage Against the Machine vocalist Zach de la Rocha to Dan the Automator.

When asked to describe a typical day, the rapper sighs and can only say, "It’s pretty fucking busy, I gotta be honest."

?Lif’s full album is much different," El-P said about the recently released disc. "The whole thing essentially is a story. It’s connected in one way or another. I don think people have heard an album like this in a long time. Lif had a whole vision for his LP."

El-P first met Mr. Lif in 1998 while touring with the now defunct hip-hop crew Company Flow. The two immediately hit it off and became close friends. These are the types of business relationships that El-P has relied on to make Def Jux a success.

"Everybody on the label is on the label because I’m cool with them and I understand what they’re trying to do," El-P explains candidly. "Most of them are really good friends of mine. If they’re not close, they’re immediate family."

This close kinship is rooted in past sour experiences El-P has had with labels. Initially signed to Rawkus, El-P’s group Company Flow felt the pressures of being on a large label in the mid ‘90s.

"I didn’t like where they were going," he states simply. "I’ve always been interested in having an independent record label. My original idea was to use Rawkus as a springboard. It was like a chess move. I was originally always intending on leaving them and taking it back in my own hands."

Along with the power of controlling his label comes a lot of responsibility, and El-P is feeling the wear and tear of being the producer in demand. On this particular day, the artist has just finished his latest project, a jazz album for the Thirsty Ear Blue series for which his dad (an acclaimed jazz musician) sings.

As for future plans, El-P and his Def Jux mercenaries are packing up shop and hitting the road, brining a freshly polished show across America. Asked if he’s excited about playing here on the West Coast, El-P seems overwhelmed with information again.